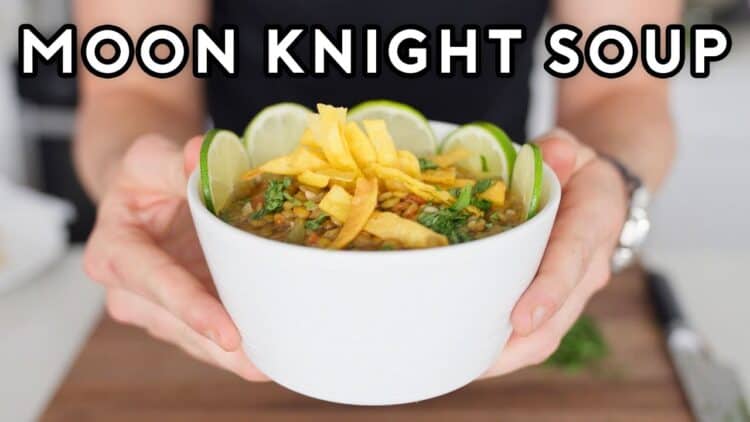 A lot of people make fun of vegans, this is the honest-to-goodness truth. The truth is that vegan food isn’t bad at all, but if a person is used to eating meat then a steady vegan diet is not the way to go since even with alternative proteins it’s just not the same. But with all arguments on that aside for the moment, vegan dishes are quite tasty since spice is always nice and there’s plenty of spice in these two dishes. The scene in the Moon Knight series that features the vegan meal isn’t exactly focused on the lentil soup, apart from including it briefly in the conversation, but here, it looks as though it’s something that might count as comfort food, and apart from the mixture of spice it does sound quite simple. More than a few people approach cooking as something that takes a serious amount of skill and doesn’t have much if any, forgiveness to those that don’t know much about cooking and have never really done much of anything save for boil water.

The best part about cooking is that there are so many fun and easy recipes out there to follow, and it’s not hard to think of different ways to tweak one recipe or another in a way that doesn’t require a lot of in-depth thought. It definitely doesn’t need the kind of thought that the Moon Knight series, as the mental headspace that’s required to comprehend everything that’s going on in the series is substantial. One good question is how could one personality be a vegan and the other personality exist with this lifestyle, and vice versa. The implications of this are kind of interesting as well since it feels as though one’s body would be out of whack switching from a vegan to a meat-eating diet.

There’s probably more thought being given to this than needs to be, but the misconceptions about vegans are often allowed to determine how people think about one lifestyle or another. Way too many people are willing to believe that vegans are nuts for not eating meat, but when looking at meals like it’s easier to think that there are other forms of protein that don’t include meat. After years of eating one animal or another it’s too easy to maintain that eating no meat at all isn’t healthy, but the fact is that there are other forms of protein and if one knows how to make it work, a vegan diet can be just as healthy. There is actually a belief that by adhering to a vegan diet a person will become less aggressive. This is a long and drawn-out explanation that many people have added to, but while it sounds reasonable to some it sounds a bit ridiculous to others. The idea of aggression being linked to what we eat isn’t that hard to believe, but some are still resistant. When it comes to Moon Knight however it doesn’t appear to matter since with a vegan and a meat-eater inhabiting the same body it feels like a confusing mess that no one would want to deal with.

Thankfully, there’s nothing too confusing about this meal, since creating something that tastes good can be a challenge, especially if one ends up overthinking it. After watching these two meals being made though it’s pretty easy to think that vegan meals are tasty enough to be worth the effort. Would any of us sit down with Arthur Harrow to discuss why Khonshu is ineffective while Ammit’s idea makes sense? That’s a good question since some folks might actually think that Harrow makes more sense than Moon Knight. It has happened that some folks have argued for the villains over the years since the MCU was started. In fact, people have been arguing for villains before that since there are reasons why people do the things they do, and even fictional characters are given reasons for the atrocities they commit. Folks such as Harrow are so convinced that what they’re doing is the right way, or that it’s justified, that they find it necessary and possible to convert others to their cause. Thankfully, this isn’t how veganism works, since a lot of people that do become vegan usually do so for a good reason.

The idea of veganism is often misconstrued by a lot of people that simply don’t understand how to live without meat, but the result is usually the same, mockery and the idea that veganism is crazy and more than a little harmful. But the truth is that being a vegan is that it’s just another life choice that people make to improve their health or make themselves feel better about what they consume. Whatever reason there is for becoming a vegan, it’s very easy to see that there’s no sacrifice of taste when it comes to being a vegan.