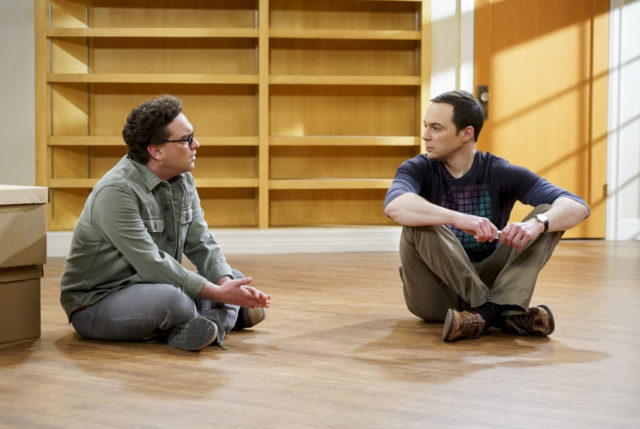 The Big Bang Theory is winding down for the year, even thought it will be on for (at least) two more, and I can’t say that I’m impressed with the direction that they’re headed. Sure it might show growth (eventually) in Sheldon if he is able to stop relying on Amy after just coming to rely on her. But mostly, Amy and Raj both moving to greener pastures feels like forced, manufactured drama. On top of that…not much of it was funny.

This week on The Big Bang Theory: The military takes over the gyroscope project, leaving Leonard, Sheldon, and Howard to contend with their own boredom. Amy gets offered a fellowship across the country, and she wants to take it, but she worries about leaving Sheldon alone. Raj plans to move out of Leonard and Penny’s apartment.

If the description makes it look like there was no meat to this story, that’s because there wasn’t. Sure, Amy leaving will cause a rift in her relationship with Sheldon, but it’s not compelling anymore. They’ve already broken up and reunited, so there’s really nowhere they can go with that story. Sheldon’s admirer returns next week to throw a wrench into things, but of course there is only one of two ways they can go. No matter what they do, I don’t think they can make Sheldon into a cheater. So really, even if there’s drama, it will likely end in reconciliation. Maybe even engagement. But I’m getting off track, the point I’m trying to make is that moving Amy away from Sheldon is an old sitcom cliche and it’s VERY played out. I’m annoyed at best.

The worst part though, was pretending that Raj moving out of Leonard and Penny’s apartment actually mattered to anyone at all. Even Raj was oozing apathy as he said his goodbyes and made empty jokes about not being wanted. Obviously, a relatively new married couple with no kids does NOT want a third adult living with them. Raj is not a good sad-sack character, so they really need to give him some quicker progress. I don’t think living with Bert is going to help that much.

Even though this episode lacked…a lot, there were some redeemable funny moments. Here are a few other thoughts/funny moments:

Next week’s season finale is headed in an obvious direction, but I hope it doesn’t turn out the way it looks like it will. Otherwise, I will be tempted to shut these reviews down and never return to them. If you’re only a casual Big Bang Theory watcher, skip this one. Not worth it.

Amy gets an excellent opportunity, which leaves Sheldon worried about their future on this week’s awful, un-funny episode of The Big Bang Theory