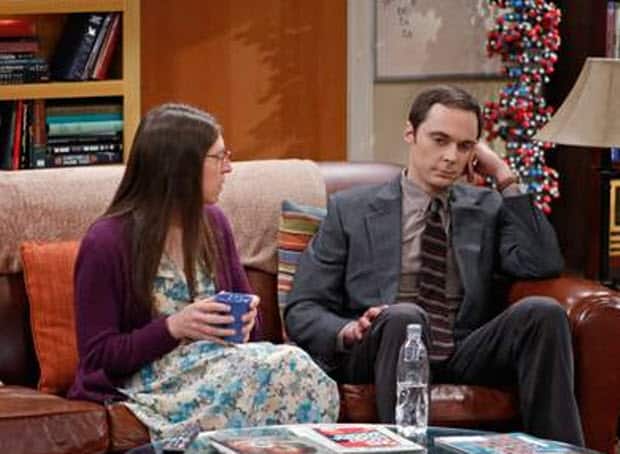 Sheldon gets drunk! It’s been seven years and it’s kind of happened in the past, but never full blown drunk. Making inappropriate comments, slapping Amy on the butt, slurring his words and making fat jokes. This is the Sheldon I’ve wanted to see for years.

But it’s Thanksgiving! I always think it is kinda weird when they air holiday episodes early because it reminds me how much I have to do in a short amount of time. The whole gang gets together, even though Sheldon has to be convinced to go. His idea of a holiday tradition is complaining about Leonard’s horrible food.

During an exciting argument about the physical impossibility of cow tipping, we find out that Penny thought she had a fake wedding with Zach in Vegas a few years back. Zach, if you will remember, was the super dumb guy Penny dated a few seasons back that she had to break up due to his lack of IQ. Leonard freaks out and constantly pesters Penny about it, and the joke is made that she always tells Leonard no when he proposes.

Penny gets sick of it and invites Zach over. He has a few great one liners about not being a good husband because he was never there. He finally signs the papers, but it was pretty awesome to watch Penny and Leonard squirm.

Back to Sheldon being drunk, its Howards father-in-law that gets him that way. While Howard is trying to connect, Sheldon accidently steals the thunder because he knows football better than any announcer on ESPN. We also see him try and burp PI.

Raj is stuck in the kitchen during all this, but he does make the comment that it makes sense that the Indian was serving the dinner. It’s been a while since we’ve heard a back handed racist comment, and I had hoped they had moved passed that. I get it, he is from India. I don’t need 7 years of jokes about it to sneak in racist jabs. Same with the fat jokes about Howard’s mom. We have only seen her legs one time in 7 years, but we never hear the end of how fat she is. I’m here for the nerd/geek humor, not at the humor at others expense. Maybe it’s just me. It was, however, nice to see a vulnerable Howard. He was working hard for his father-in-laws approval and it was sweet.