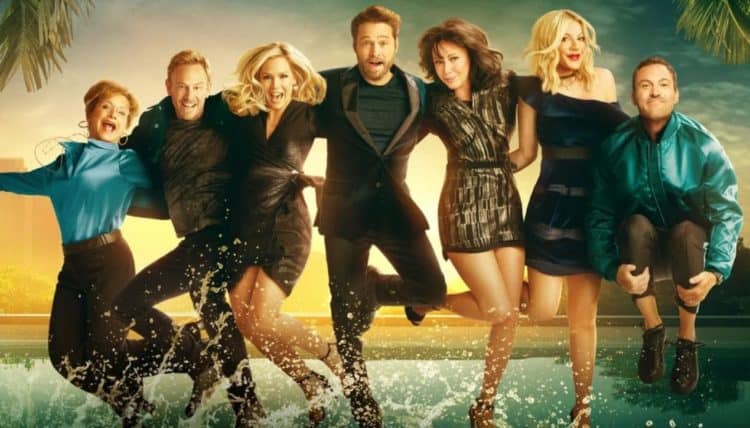 It almost seems as though Mike Jones of ScreenRant might be hoping that BH90210 was going to be a serious comeback for the original series as it does seem to be debuting as one of the most watched series of the summer. But that’s a fleeting thing if anyone is getting too excited at this point since the idea of bringing them back for a regular show just doesn’t sound like it would be in the cards. So far the reviews aren’t exactly that great but they’re not horrible since one has to remember that 90210 was great back in the day but unfortunately that day has come and gone. In a world that now views reboots and remakes as a kind of second chance for actors and shows that might have been insanely popular before this is still a pipe dream with a definite clog problem, and that’s because most of what we could see from the show has already been done and over with for a long time now. Fans would no doubt disagree since, well, that’s what fans do when you challenge something they happen to like. But honestly, after this mockumentary it’s time to say good bye to to the gang once again unless someone with enough clout and a silver tongue can convince the more gullible producers that this would be a good idea.

Bringing the show back would be a mistake on so many levels, not the least of which is the Luke Perry-shaped hole that would be felt by everyone. After his passing a lot of fans no doubt felt, but didn’t want to admit, that the series just wouldn’t be the same without him if it was brought back, and they’d be right. There are hundreds of ways to spin the death of a character on a show and make it work, but this time doesn’t seem all that feasible since Dylan was such an integral part. In truth they might be able to cut a couple of people out of the picture and be just fine, but Dylan isn’t one of them. Bringing the show back at this point would be a huge mistake not only because of the lack of Dylan, but also because for a limited time it seems that people are bound to be excited and will chomp at the bit to get as much of the show as they can get. But after that? You can almost bet that people would find it less than appealing after about a season because quite honestly what’s left doesn’t seem like it would be enough to really entertain a teenager from the current era.

Some folks would say I’m wrong, and that’s okay since everyone gets an opinion to hold onto, but there are a lot of stories out there that are more gripping than the plight of a bunch of rich kids who are now rich adults trying to navigate through their average day. Riverdale might actually be more popular than this show if you really think about it, and in fact other sitcoms might be able to topple it if it went on for longer than this summer outing. It’s not so much a desire to rip into the show for no other reason than not being a fan of it, the truth of the matter is that the show did have its time, it did shine for a while, and it’s obviously popular for the summer, when people can tune in and enjoy their favorite actors once again. But it’s likely getting less than stellar reviews because it’s not really the show. It’s the actors, talking about the show, reminiscing, and going through their average days, rather than acting the parts they played two decades ago. In a big way it’s almost like watching an episode of ‘where are they now?’ and trying to get excited about something that was, in its day, a very popular program.

For the summer it’s not a bad show to get hooked on if you were a fan of the original and want to see what the actors are up to. All of them have done at least a little something throughout the years and have managed to stay in the news and public eye now and again but not all of them have really had the same level of success since Sharknado was probably one of the biggest success stories among the lot of them, though only God knows how that one happened. It’s true that the lot of them have been up to one thing or another since graduating from the show, but going back to this program more than once would be a huge mistake since at one point or another it would become the only thing they might be known for anymore. It’s better to be known for Sharknado at that point.