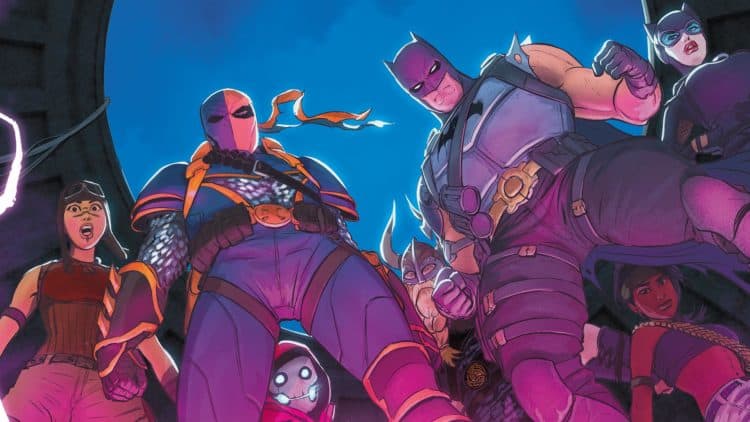 The fifth entry in the Batman/Fortnite: Zero Point limited-run comic series is the penultimate chapter that nearly concludes The Dark Knight’s crossover with Epic Games’ most popular game in the world. Previously, we left off with a terribly shocking cliffhanger, where Fishstick died (rest in piece, Fishstick) and we discovered that someone in the group had to be working for “them” (whoever “them” is) and never actually went into the Loop. That now leads us to the beginning of Batman/Fortnite: Zero Point #5 which sees Batman and the gang searching for a way out and back to their home worlds. So, what exactly went down in Batman/Fortnite: Zero Point #5? Who ended up betraying who, in the end? Well, if you know anything about Batman, you can probably take a wild guess and get it spot on.

Batman/Fortnite: Zero Point #5 jumps right into the action and shows Deathstroke with his team fighting a couple of security guards who are guarding a mysteriously unknown object. We then see a super badass looking Batman drop in from above with Catwoman to assist the other group. When I tell you that Batman looks sick as hell, I’m serious. He’s got the dark and brooding presence with a torn sleeve and a ripped cape, and he’s moving swiftly through smoke, so you can’t even see all of him, it’s insane. So, Batman and Catwoman come in kicking ass and taking names, just when Magnus decides it’s a good idea to kill one of the security guards. If you know Batman, you know that his one rule is no killing (except on certain occasions that we won’t go too much into detail about), so he immediately yells at Magnus, because he just killed a dude. Not only is it murder, but it’s also less information that they can obtain, because the guard is dead now. Batman asks how the rest of the group ended up together, to which Deathstroke replies that the other corridors were either impassable or too heavily guarded, but Bonehead mentions that they aren’t all together, because Fishstick’s not there. Batman cuts him off before he can finish, saying that Fishstick was killed by some sort of energy beam.

The group enters what looks to be a meeting room, or a “war room” as Catwoman calls it. Batman finds more ancient writing that he has apparently deciphered, most of which is “something about the place from which all reality sprang,” called “The Zero Point.” He also mentions that there’s supposedly a “grand plan to bring order to…everything.” The team ends up getting thrown into the middle of a fight with some more guards, and Deathstroke tells Batman to use his liquid nitrogen capsules in combination with his fire spear to collapse part of the room. They finish off the rest of the guards in a good, old-fashioned fist fight and proceed further into the building.

It’s here where the team discovers the Zero Point. Eager to escape back to his own home world, Voyager leaps into the Zero Point, only to be instantly torn apart and his body scattered into an endless amount of pieces to be scattered about the entire universe. The team figures out a way to control the Zero Point, and a few hours later, have put together a creative solution in order to send everyone home. Raider decides to take it for a spin first, since she’s the one that’s been on the island for the longest amount of time, and is willing to take whatever risks necessary to get back home. Fortunately, she ends up making it all in one piece. Unfortunately, Batman decides this is a great time to call out Deathstroke for being the mastermind – or rather a puppet – behind the whole thing, because he had never used his liquid nitrogen capsules in front of Deathstroke, leading Batman to believe that he was able to keep his memories of the world that he, Batman, and Catwoman all came from. He also pointed out that the injuries that Fishstick had suffered were similar to that of Deathstroke’s fire spear. A huge fight breaks out between everyone, which ultimately leads to Deathstroke being tied up. Everyone else goes back to their world, except for Batman, Catwoman, and Deathstroke, because they all came from the same world, so they can leave together. However, Deathstroke breaks free of his restraints, and pulls out a new device (one which we’ve seen in-game before) and leaps into the Zero Point, leaving Batman and Catwoman “stuck in a crazy alien dimension forever.”

That wraps up Batman/Fortnite: Zero Point #5, so it looks like we’ll finally be able to figure out who is behind this whole thing and if Batman and Catwoman will ever actually make it back to their home!