Home
Movies
What Are the Best Zombie Movies of All-Time? 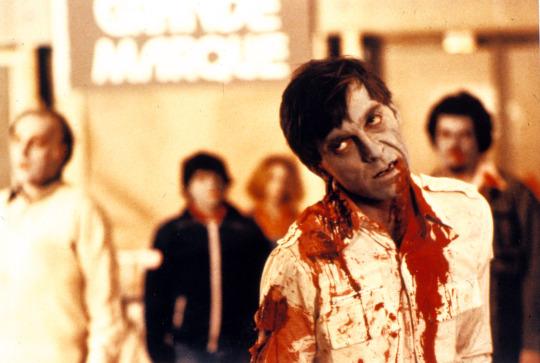 Zombie movies are disgusting, they’re revolting, and they’re absolutely horrifying. That’s why we love them of course. They show us a type of plague that isn’t readily identified, doesn’t have a cure, and causes a condition that is so much worse than death that the human mind has trouble not retching at the sight of it. And yet so many people are so zombie-crazed that there are actually folks who are awaiting the zombie outbreak when it finally does happen. Unlike those on The Walking Dead and in the various zombie movies however there’s a good chance that in this world at least we’ll be ready to deal with the threat head on since we’ve go so much zombie lore to go on. You know, shoot them in the head, stock up on whatever you can, stick together to survive, that kind of thing.

Here are what, in my opinion, are the top five zombie movies of all time at this point.

There are so many different ways to view zombies that some of the older ways seem to pale in comparison to those that are used as of now. But in World War Z you can’t deny that the virus that attacks and overwhelms a body is quick and seems to unite the zombies somehow like a hive mind as they almost come together like a colony of ants going after a singular purpose. It’s creepy and strangely hypnotic.

We saw the typical slow but determined zombies in this film, along with something that could only be described as monstrous and absolutely lethal. The deaths in this film weren’t caused by just the zombies however as the Red Queen that controls the Hive is just as homicidal as the undead creatures created by the T-Virus. I know, a lot of names being thrown out at once, but it’s based off of a video game so you kind of need the context.

This one actually stunned me in how the zombies were allowed to move. I fully expected them to be slow, unrelenting, and just as deadly. But when I saw that little girl zombie get up I expected her to start making her way slowly down the hall, growling and reaching all the while. Nope, the mean little girl got up and  she RAN for the door. I think my eyes must have been size of golf balls at that point. A running zombie? Huh boy, as if they weren’t bad enough.

2. Shaun of the Dead

The comedy aspect of this film was awesome and more to the point it kind of diluted the horror of it but still kept the serious issues that come with any zombie film. For one Shaun doesn’t like the zed word, as he describes it, and two, he doesn’t initially think much of killing his stepfather Phillip. Of course when Phillip opens up to him in that last second confession it becomes a little harder to let go.

1. Night of the Living Dead

You didn’t think I’d forget this one did you? In any top five, ten, or one hundred list this one would make it near the top no matter what. After all this is one of the classics that spawned the entire zombie genre and helped make the rules about what they were and how they acted. Granted a lot’s been done since then, but it’s still important to remember where it all came from.

They’re coming to get you Barbara….