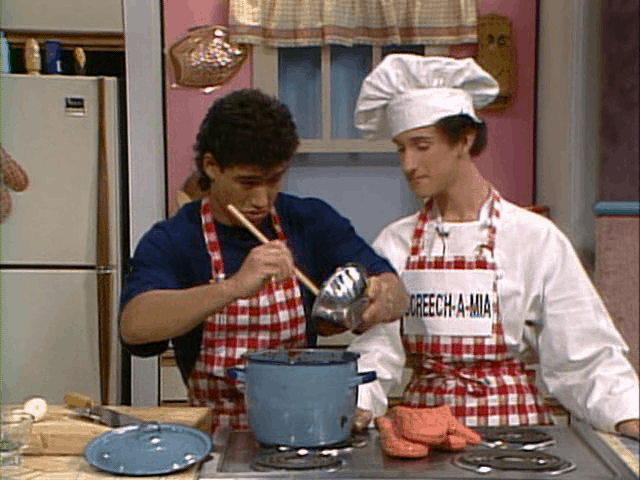 The excitement has finally died down after Jimmy Fallon hosted a reunion of sorts with the cast of Saved by the Bell on The Tonight Show in early February. The sketch depicted Fallon as a student at Bayside High School hanging out with Zack Morris (Mark-Paul Gosselaar), A.C. Slater (Mario Lopez), Jessie Spano (Elizabeth Berkley), and Kelly Kapowski (Tiffani Thiessen).  Dennis Haskins even popped up and reprised his role as meddling Principal Mr. Belding. The reunion did not feature cameos from Lark Voorhies and Dustin Diamond, who played Lisa Turtle and Screech Powers, respectively. Over these past few weeks, some of us here at TVOvermind put on our stonewashed jeans and our best pairs of Cons and watched classic episodes of the series. This week, we will be picking out the three greatest episodes from the fourth and final season of Saved by the Bell. Season 4 was when we were introduced to biker chick Tori, watched Slater and Zack get into a fight over a girl, and saw the gang learns the dangers of drinking and driving.

This episode is mostly about Screech, but even that can’t stop this episode from being considered one of the best from the fourth season of Saved by the Bell.  The gang is enrolled in a Communications class and they are putting together a news program.  Lisa and Zack make a perfect team as co-anchors, while Kelly is stunning as the weather girl.  Jessie is an investigative reporter who visits Mr. Belding and grills him about a school issue. Screech has somehow been selected to host a cooking segment and he creates a spaghetti sauce that his grandma had made for the family.  Everyone is surprised how delicious the sauce is.  Zack decides to take advantage of the situation and sell the product so they can become rich.

The highlight of this episode is when the gang visits the Chemistry lab. They use a conveyor belt and begin to package the sauce, with each person selected to do a different task. However, the belt goes haywire and the gang is unable to keep up with the sauce containers coming down the belt. It is a great moment of physical comedy that is not always showcased on Saved by the Bell.  In the end it turns out that Screech’s sauce is stolen from a cookbook and he is going to get sued if he continues to market the sauce.

Soleil Moon Frye stars in this episode as Robin. She pretends to like Screech so he will buy her stuff. After this episode, she is never seen or heard of again.

Zack: Uh… Screech, did your grandmother get her recipe from the Betsy Crocker cook book?

Screech: Well, of course she did. That’s why it’s so good. Grandma was a lousy cook.

I always thought this was one of the coolest episodes of Saved by the Bell when I was growing up. The gang is in drama class and they are trying to figure out a cool idea for a play to put on this semester.  Since Zack always has the best ideas, he volunteers that the class should do a rap version to Snow White and the Seven Dwarfs.  Luckily for them, there are seven nerds in the class with them and they change the part of the dwarfs to fit the qualities of a “dork.”  Lisa gets the part of the Mirror from the Mall, which makes sense because she loves to gossip.  Jessie is cast as Snow White, which upsets Kelly who ends up doing a pretty good job of being the Wicked Step Mother. Naturally, Zack takes on the role of Prince Charming. Slater wants nothing to do with the play, but that changes later in the episode.

Part of the play consists of Zack and Jessie kissing. They stay after rehearsal to practice their techniques, but it appears they are doing a little more than acting just as Lisa walks in and witnesses the smooch.  Slater begins to suspect something is going on and becomes the 8th dork Studly.  Jessie and Zack have to figure out if the kiss truly meant anything and do it again. Luckily, they don’t feel anything so they kiss again to celebrate just as Slater and Kelly walk in on them. In the end, Jessie and Zack change the lines of the play to have Snow White fall for Studly and Prince Charming pine for the Wicked Step Mother.

Kelly (As Snow White): Mirror, Mirror from the mall, who’s the awesomest of them all? If you say Jessie, I’ll break you.

Lisa (As the Mirror): Uh, I pass. Next question, please.

It is time for Zack and the rest of the Saved by the Bell gang to graduate from Bayside High. However, there is one slight problem: Zack is one credit shy of meeting requirements for graduation. Funny how Mr. Belding is so involved in the students’ lives that he never bothered to share this information until it was almost time to graduate.  Luckily for Zack, there is a production of Sawn Pond in the works. He, plus everyone else, put on a pair of ballet shoes and performs one of the funniest moments in the history of the series.  The ballet was a success and Zack receives the credit he needs to get his diploma.

Elsewhere, Jessie is assuming she is the Valedictorian for the class of 1993 at Bayside High. However, the honor is bestowed upon Screech. It must have been that one C she received on her Geometry test during Season 4 that set her a tenth of a point behind Screech.  He does not want the honor and tells Mr. Belding to give it to Jessie.  Lisa overhears this all and accidentally spills the beans on who really was the Valedictorian.  Jessie sets everything straight at graduation and Zack gives an awesome commencement speech! It was a nice episode to say good-bye to our favorite characters.

Jessie: (About Screech): Lisa, he once got dressed, and THEN took a shower.

What is your favorite episode from the fourth season of Saved by the Bell? Let us know in the comments section below.