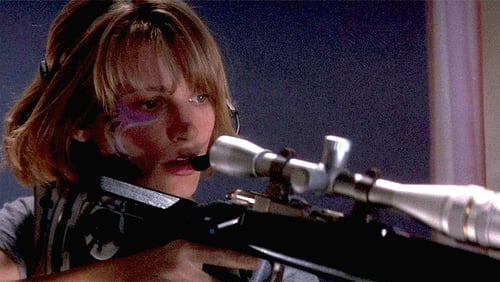 When she was still a big part of show business Bridget Fonda was great, she was fun to watch, had a decent sense of humor and could even pull off an action role in an era when women weren’t given much thought when it came to their being aggressive on film. But as her profile might tell you she did step away from the industry in the early 2000s and a lot of people haven’t even thought twice about her since, though if you stop and take a look she’s been a part of some very memorable movies that were a lot of fun and in some cases were even able to help shape the movie industry back in her day. As far as the 90s she was one of the women that we looked for at times since she was a good deal of fun and she was capable of delivering a great performance when asked to do so. It’s too bad that she’s not in the business any longer but people do have to realize when they have to look differently at their priorities.

This had all the elements to become a silly and goofy movie and it kind of went that route since despite being horror-based it was still comical enough just from a reasonable standpoint since a crocodile the size of a small bus going unnoticed in a land-bound lake is kind of hard to swallow. But as a horror movie it does kind of work since this is the kind of creature that’s so insanely dangerous that it can be lethal on land as well as in the water. The fact that it had Oliver Platt and that he was an associate of Fonda’s character only made things better since it brought comedy and horror together in a big way that was hard not to like.

A romcom is something that has a pretty big expectation since it needs to be funny enough to laugh at but still touching enough to really make a person go ‘awww’ in their own way. Thankfully Doc Hollywood fires on all cylinders when it comes to this since Michael J. Fox at his peak was absolutely great. Fonda played kind of a smaller role in this movie but she was noticeable in a way since she was one of those characters that you kind of wonder why they’re there to begin with, but eventually realize are just another part of the story that needs to be there in order to round things out and make it work just a little more.

The Grunge era in Seattle, Washington was its own movement back in the 90s and it was one of the biggest things going for a while since at ground zero it kind of had a huge effect on a lot of people that continued to spread and spread as more people took it up. But apart from that movement was the idea that people had such a huge issue when it came to simply getting together, staying together, and simply finding a compromise when it was needed. Janet finally looked like she was ready to move on by the end when Cliff finally realized that she was the woman that he needed in her life. Oy, relationships.

Inkoo Kang of The Wrap has quite a bit to say about this movie and how it adapts to the current era, but in truth this movie is all kinds of disturbing since it shows just how bad obsession can get. When Hedy moves in with Allie you can almost hear the ominous music mounting with each passing second since quite obviously Hedy has a few issues. You can count the kills as the movie goes along and since each one of them, apart from her own, are on Hedy’s account, you can guess that this woman has no problem getting rid of anyone that seems to stand in the way of her getting what she wants.

1. Point of No Return

It’s not often that you see a drug addict taken in and taught how to kill people, but it definitely worked for this movie since Fonda, as Maggie, took this business to heart as she went on doing the bidding of her employers until she’d had enough of it. At one point she even had a cleaner that had been sent by the agency to take her out for a failure that she’d been responsible for, but as you might guess she got out of that as well and could have been running for the rest of her life. But thankfully her handler did the right thing and reported her as dead, which usually gets about a 50/50 chance in the movies.

It’d be nice if she came back for a short appearance, but don’t hold your breath.