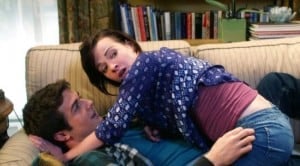 Jenna struggles with her live-in boyfriend in this week’s all new Awkward.

Hey Roomie. Jenna is reaping the benefits of having her super hot boyfriend in the room next door. But, there are some less than benefits as well. Her dad is spying on them, Matty takes far too long in the bathroom (using all of the hot water) and he’s getting a little comfortable. Buying tampons for your lady love is a thing that should probably not happen until years down the road. And Matty’s good manners and willingness to help out aren’t convincing her parents to push him to the curb any time soon. She’s terrified to tell him how she really feels but keeping everything bottled up proves to be dangerous in more ways than one. Releasing the pressure ends up being a good thing, because Matty (being the great guy that he is) totally understands. Boys can just be a little oblivious sometimes (tell me something I don’t know).

The Inner Circle. Lissa tells Tamara about Sadie’s annual cheer sleepover and then has to backtrack when Sadie catches her doing it. Tamara will not be sidelined, though. She’s desperate to be accepted. Jake is worried about her even trying, since Sadie and her minions are known to be evil. Only, when Tamara shows up to make her stand, it’s just Tamara and Sadie there. Tamara calls Jake for an early escape but winds up getting snarked into contacting Ricky via the “Spirit Board,” where they seem to conclude that Ricky was murdered but not by either of them. They call a truce and share Sadie’s bed for the night. In the morning, Tamara confirms the rumor that Sadie’s parents are broke and swears not to tell when Sadie swears that if she does, she’ll be the next cheerleader with a broken neck.

– “The morning dig. For my mother, it was the best part of waking up.”

– “I am an expert at getting men to leave my pad. Most often in the dark cover of night while I am sleeping.”

Check out more pictures, spoilers and information on the Awkward page.