Home
Movies
Army of Thieves: A Safe But Fun Prequel 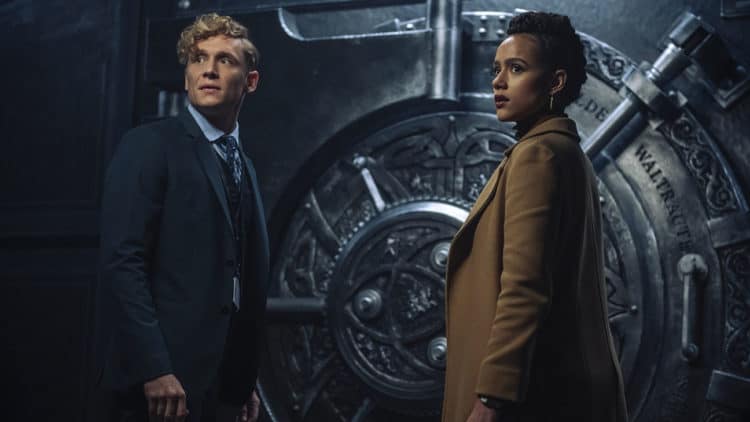 Fresh off the heels of Zack Snyder’s Army of the Dead, which saw a rag tag group of bandits try to pull off a big heist during a zombie invasion, including Matthias Schweighofer’s Ludwig Dieter (real name Sebastian Schlencht-Wohnert), who would ultimately die in the Zack Snyder feature. Army of Thieves recounts the master locksmith’s life before his untimely demise and the film has its fair share of entertainment; however, Army of Thieves is a heist thriller that you’ve seen a thousand times before.

We start off with Dieter himself, who explains Hans Wagner and a series of four safes: Das Rheingold, Die Walkure (or The Valkyrie), the Siegfried, and the Gotterdammerung. The story of the four safes highlights one of the core issues of Army of Thieves: There’s several interesting directions that the film could go, but the Netflix exclusive opts to stay on the same predictable path. The backstory behind the four safes is actually an interesting one; A grieving widow and father decides to commit suicide by locking himself inside a safe that’s nearly impossible to open. It would’ve been cool if the film followed Hans Wager and his psyche during this period of time as he created the four safes. Army of Thieves could’ve been an interesting character study on love, death, and how we as humans coup with such an emotional experience, but this wouldn’t be called Army of Thieves now, wouldn’t it?

The four character introductions and their brief flashbacks also showcase fun stories that could be stand alone as features. It would’ve been fun to see Alexis transform into Brad Cage and follow his journey as a master thief. Or Gwendoline’s child hood upbringing following the swiping of her first watch. Hell, a feature about Rolph being a gateway driver could’ve rivaled the early Fast & Furious movies. Even Korina causing an uproar over stealing Pirates of the Caribbean 2 could’ve been fun. The point of me bringing up these different scenarios that don’t particularly have anything to do with Army of Thieves is due to the film never justifying its existence. Don’t get me wrong, Dieter is perfectly fine as the protagonist thanks to Schweighofer’s earnest and charming performance. However, Amy of Thieves feels trapped under its own predecessor.

Since Dieter doesn’t die until Army of the Dead, any sort of threat such as death or prison time rings hollow because we already know his fate. You expect Dieter to crack the first safe with ease to prove his worth; And he does. You know that he’ll have some trouble with the second lock, but he’ll ultimately crack it. And he does. The stakes are incredibly low because Army of the Dead exists. It would’ve been great if the film was more of a character piece that examined Dieter’s upbringing. Why does he want to become a master safe cracker? Why is he a loner? What propels him to take interest in Hans Wager’s story? There’s interesting pieces to the puzzle here, but the film’s lack of originality is what holds it back from being great.

Another issue with Army of Thieves are Dieter’s visions of zombies throughout the film. These moments never affect the psyche of Dieter’s character nor does it come into play with the actual plot itself. These unnecessary moments are the filmmaker’s way of telling you that this is a prequel to Army of the Dead, even though one of the core characters of its predecessor is leading the charge of this prequel. Those visions ultimately prove to be worthless and jawing since the zombie situation isn’t addressed by any of the other characters.

Despite the predictable beats of Army of Thieves, there’s no denying the movie has a kinetic energy that’s both entertaining and fun. The movie speeds along its two hour and seven minute runtime thanks in large part to the fun characters that occupy the screen. The chemistry between Rolph, Korina, Brad Cage, Gwendoline, and Dieter is off the charts good and Shay Hatten and Zack Snyder – the two credited writers for Army of Thieves – do a great job of making sure that audiences connect with the core cast of characters. At the end of the day, Army of Thieves is harmless fun. The film is well shot and there’s some cool stylistic choices that are accompanied by great performances. You’ll definitely have a good time watching this Army of the Dead prequel; As long as you don’t expect it to be anything more than a formulaic heist thriller.