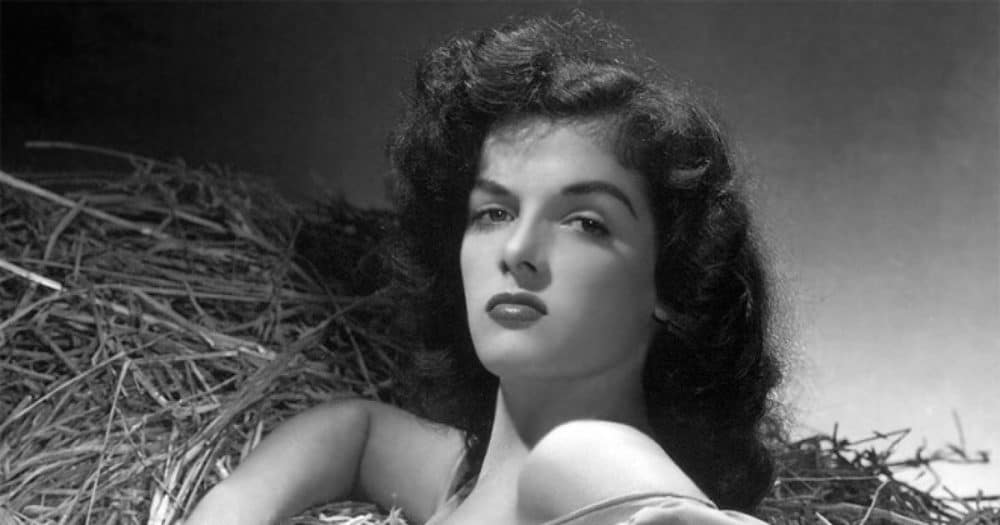 One thing you can say about Jane Russell back in the day was that she was a definite sex symbol and she played it up as much as she could. She even admitted that sex appeal was a valuable part of cinema, but only in good taste. She didn’t believe being a sex symbol had to be vulgar or in any way so over the top as to be crude. There was a time when sex appeal didn’t mean being nearly nude and had some true fashion and mystique involved with it and she was one of those that obviously helped it along until it was given over to one generation after the next until it’s become what it is today. Jane was a rather classy lady back in her day and was highly talented as well. She could play the piano and became interested in drama lessons early on in life. After her father passed away her mother urged her to continue with the drama and eventually found an acting coach that helped her to land one of her first roles in The Outlaw. The film was finished in 1941 but wasn’t given a release until 1943 due to issues that arose from the way her cleavage was shown in the movie.

One needs to remember the time period in which this film was being made and keep in mind that sexuality in films was still viewed very differently than it is now. Eventually the film became quite well-known and Jane became the sex symbol that she was for much of the 40s and 50s, but at that time, just as now, there were always those that were going to speak out about the way women displayed their bodies on camera.

There’s no denying the sex appeal in this one as she falls in love with Billy the Kid even after having decided to shoot him. Movies in the 40s must have made a lot more sense to those that watched them first time around, but then again things in the movies these days are convoluted on purpose and tend to make the audience run circles around their own perceptions in order to come to an obvious conclusion. In the 40s it seems that the movies were a little more straightforward and to the point, making it a lot easier to see what was coming and that the protagonists and antagonists were who a person thought they were. But to tell the truth the state in which she was filmed in this movie seems to be rather suggestive no matter that a lot of male viewers likely found her very alluring. It’s highly conservative by today’s standards but back then it would have likely drawn a lot of gasps in the theater. Different times for different people though.

Despite the sexy nature in which she performed Russell was a devout Christian, which is kind of amusing really since a lot of those that call themselves devout in this day and age wouldn’t be caught dead in such outfits and with so much of their body showing. But it does tend to pose a very interesting image of religion in that she went all out when it was for her job but likely covered up quite a bit when she was off camera. She was an actress after all, if she didn’t want to do what she loved then there was a good chance that someone else would step up to do it and forego the lesson in morality that was to be learned. There’s nothing wrong really with exposing one’s body so long as it’s in good taste and is not done for simple shock value. Russell was the type to put on a show and take it only as far as she needed to go in order to get the shot and make sure that people were entertained. Being a sex symbol for her era meant that she went beyond the call of her job at times, but not so beyond that she could have been called a porn star.

She was a lady and a great actor in her time and created quite the resume as she waded her way through Hollywood, making headlines and doing her absolute best to become one of the most well-known women around the world. Jane was among those that were some of the most beloved and yet slightly controversial when it came to her act and her personality at times, but her popularity far outranked whatever anyone had to say about her. She’s gone down at this point as one of the legends of film that rightfully earned her spot and became one of the best female actors of her time and any other. In fact people still look for her films at times in order to remember her greatness.