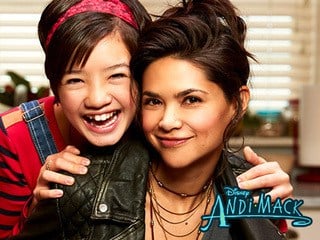 Any show that dares to tackle tough subjects with kids automatically earns my respect. Children’s shows with a strong moral premise are particularly difficult to write in a way which appeals to kids for a long period of time. Even more difficult is creating a main character whose life isn’t flashed up with the razzle dazzle of fame, affluence, or some other fantastical circumstance. Andi Mack is a show which grabs its target audience’s attention with the show’s main twist, but keeps it with grounded characters any kid or parent would want to know.

For those who haven’t yet seen what the fuss is all about, stop reading if you aren’t yet aware of the series’ twist. On her 13th birthday Andi gets what she thinks is the best present when her older sister Bex surprises her with a visit. Bex surprises Andi when she decides the time is right to tell her that she is her biological mother, not her sister. While it’s not said outright, the idea of teen pregnancy is put out there. While there might be some who will protest that this topic is too mature for younger audiences, it’s not the main focus of the story past the pilot.

The main focus is Andi, a regular teenager who just happens to be navigating a special change in her family dynamic. She spends her time recycling various objects into jewelry and other cool art pieces. Her two best friends Cyrus and Buffy are polar opposites, but 100% supportive of each other and of Andi when they find out her situation. Andi also has her first crush and a nemesis (who really needs to be hanging out with people her own age).

Andi’s situation is dealt with, but not overdramatized. The adults are not exaggerated to be caricatures whose parenting skills are nonexistent. Both Bex and her mother Celia are made to be human navigating new waters, and both are protective of Andi in their own ways. Celia is the responsible mom/grandma who tries to let go a little bit, but ultimately has the experience to justify her rules. Bex excels at being the cool mom even when it’s inappropriate. However, she too is desperate to protect Andi from things she is not ready for, specifically who her biological father is.

One of the strongest moments in the episodes which have aired thus far is Andi calling out the adults on their mistakes, something kids shouldn’t be afraid to do. Parents do make mistakes, sometimes big ones, and kids like Andi should feel safe enough to express their disappointment and wishes honestly. I’m all in and would recommend parents watch this show with their kids.

What is your verdict on the Disney Channel’s newest series?