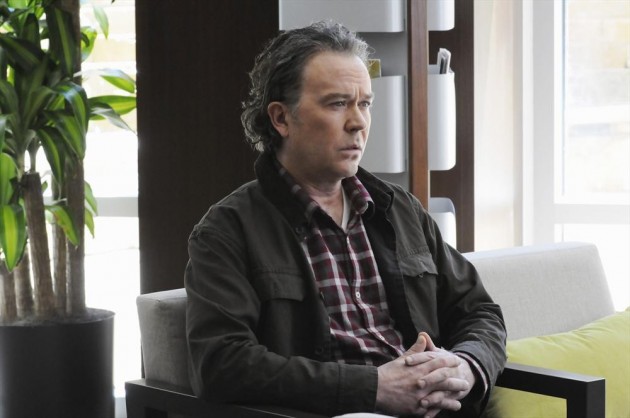 There are moments in American Crime, the new ABC anthology from 12 Years a Slave‘s John Ridley, where there’s an unapologetic, subtle examination of race relations in America. In these moments, American Crime pushes the lens closer to characters, and lets silence and performance speak to the dissonance in perception between one group and another. These moments are unseen on network television, scenes that capture powerful exchanges that trigger uncomfortable internal conversations about how we actually feel about the state of the so-called diversified land of acceptance we purport America to be.

One particular scene in “Episode One” sticks out: near the end of the pilot, mechanic and father Alonzo Gutierrez (Benito Martinez of The Shield) arrives at a police station where his son Tony is being questioned. Tony’s already answered a few questions before Alonzo arrived, and when he gets there, he puts even further pressure on his son to tell the truth. Informed by earlier scenes of him sheltering his children from the stereotypical “fate” that awaits young Latinos, Alonzo’s demands that Tony tell the police what’s happening. He tells the police they entered America “the right way,” and so his son will do the “right thing” – he’s trying to appease himself to the police, defending his status as a citizen in a way no naturalized, white American would ever have to do. At the same time, he’s begging his son not to fill a stereotype and be a hard-headed young cholo; he wants to protect his son, but is ill-equipped and uninformed to do so. As a result, his son ends up being arrested for murder on the spot, ripped away from his father, who pushed him to give the information that sends the central case of the series in motion.

In moments like those, American Crime can be breathtaking… however, those moments are too few and far between, a series that fully embraces stereotypes and one-dimensional characters, then throws a couple plot twists in to make it seem like some forward-thinking show about race. At times, it becomes so self-serious it’s almost satirical; hearing mourning mother Barb (Felicity Huffman) go on about being a single mother in public housing and how it causes her to use phrases like “some Mexican” and “those people” later is laughable, no matter how fantastic Huffman is whenever she’s allowed to dig her teeth into a scene. Timothy Hutton plays absent father Russ, who gambled away his family’s life and was resigned to making Sunday calls to his son, good ol’ American war veteran Matt Skokie, who turns out to be… dun dun dun… a drug dealer!

The fact that is the episode’s big twist speaks to how “forward-thinking” American Crime is as a whole: it has an interracial couple whose entire character definitions are “horny drug addicts” (which of course, is cinematic ‘true love’), a Latino father who is a mechanic, and another Latino, tattooed character who commits credit fraud for weed money. To suggest American Crime is some complex, carefully constructed drama, at least in its first hour, is a large overstatement: there are a few moments where American Crime feels like the layered cable drama it wants to be, but the tenants of mass appeal television sink in.

Can American Crime grow out of this? Sure, but it needs to find better stories to do it with: the death of a white man in a diverse community is not the revelatory moment the show thinks it is. In fact, thinking the death of a young white male somehow is going to shed light on the experiences of minorities (which in the pilot, is exclusively related to felonies; there is a black D.A., but it’s one against four here) is a bit off-putting, centered around a white family but still trying to speak to how that affects an entire range of communities. With the only white criminal already dead, the only judgment to pass is on the minorities of the show – and although it’s not something American Crime parades about, it remains a simple truth that makes the entire experience unsettling for this humble critic.

What makes it so frustrating is how scenes like Alonzo and Tony’s stand in stark contrast to what the rest of the episode was like: there are two or three moments where American Crime does a pretty solid The Wire impersonation, letting situations speak for themselves, rather than having the characters in said situation explain it for us (the bi-racial pictures of couples Aubry and Carter hang in their gross apartment is eye roll-worthy, by comparison). In those moments, American Crime is refreshing – as is its approach to telling the story of a murder, focusing squarely on the families, rather than presenting detectives as protagonists, and gateways to story. This allows for a lot more gray areas; cops work in black and white facts, and letting the families carry the dramatic weight of discovery gives space and atmosphere for much more nuance – though so far, that nuance is something American Crime does not have control of, at least not yet.

Anytime a show proclaims itself to be as important as American Crime has in upfronts and interviews, it places a massive amount of responsibility on the show to tell its stories with a careful, even-keeled hand. Network television desperately lacks this, and American Crime‘s promises of delivering it aren’t quite supported by the material of the pilot – which may be an unfair judgment, being a pilot trying to establish a foundation on which to build these stories on. But I don’t see it in the foundation, a collection of cardboard characters pushing through stories we’ve seen a dozen times before, and only a few moments where Crime can push the conversation in a new direction, or examine it from a new angle, one that lacks the pretentious nature of some race-examining storytelling. Hopefully, the show will be able to work out that balance as it unearths the mystery of Matt’s death and how it affects the many families the show depicts, because while I don’t know if we need another murder mystery on television, we could sure use a show like the one American Crime wants to be, particularly on network television. There’s always hope, right?