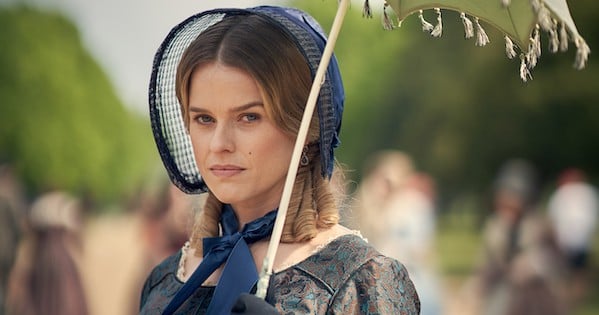 Becoming an international celebrity certainly isn’t an easy task. However, Alice Eve has taken on the challenge head on. In just over 15 years, Alice has managed to build a successful career in the UK and the United States. She has been a part of several successful projects on both the big and small screen. You may recognize her from things like the film She’s Out of My League and the show Entourage. Alice’s current project, a series called Belgravia, is set to be her next hit. Despite being a British production, the show will also air in the United States to give fans on both sides of the pond another chance to see Alice work her magic. Here are 10 things you didn’t know about Alice Eve.

When asked who she admired the most, many probably assumed that Alice Eve would answer with another actress or someone in her family. However, she said Hilary Clinton. Why? Alice says “because it’s not easy being bullied and humiliated publicly and carrying on.”

2. She Knows Exactly What Superpower She Would Want

Asking people which superpower they’d pick if they could has become one of the most common icebreaker questions. As a result, it’s something that people have thought about more than they’d ever admit. If Alice Eve had the chance to pick a super power, she’d want to be able to fly. She’d use this power to get everywhere she wanted to go and cut down on the pollution caused by plans.

3. She Was On The Rowing Team At Oxford

Alice Eve has always wanted to be an actress. But when it came time to choose the path she wanted to go down, she decided to take a more traditional approach. She attended Oxford University where she studied English and was a member of the rowing team. Eve felt like she owed it do her parents to pursue an education after they had paid for years of private school.

4. She Has Fond Memories Of Her Grandmother

Alice enjoyed spending time with her grandmother when she was a child. In fact, her earliest memory is of her grandmother. Alice told The Guardian that one of the first things she remembers is  “Grandma giving me a banana sandwich in the basement kitchen of our house in west London. I was maybe two and my mum and dad had gone on holiday without me for the first time. Grandma was able to feed me chocolate and banana sandwiches and, when they came back, I was twice the size.”

If you’ve ever taken a close look at Alice Eve, you may have noticed that her eyes are two different colors. That’s because she suffers from a condition called Heterochromia which causes the eyes to be different colors. Rarely, it can also cause discoloration of the hair or skin.

6. She Wanted To Be Cleopatra

Do you remember what you wanted to be when you grew up? When Alice Eve was a kid, she grew up dreaming of becoming Cleopatra. She didn’t elaborate on where this feeling came from, but who wouldn’t want to grow up and become royalty?

7. She Ate Nothing But Spinach To Prepare For Star Trek

Being an actor sometimes means you’ll have to change your appearance based on the role you’re playing. When Alice Eve played the role of Carol Marcus in Star Trek Into the Darkness, she had to get in the best shape of her life. In order to do this, Alice revealed that she ate nothing but spinach while getting ready for the role. Sure, this may seem a little extreme, but it definitely paid off.

8. She Has An Interesting Choice For The Person She Would Want To Play Her In A Movie

Alice Eve has already thought about who she would like to play her if there is ever a movie about her life. Oddly enough, her choice isn’t a woman. She says she would ask her friend Sean Pegg to play the role – actually, he would insist.

9. She’s An Advocate For Wildlife Conservation

Taking care of the environment is at the top of Alice’s priority list. She is a strong advocate for wildlife and ocean conservation. Alice says, “As a member of the Animal Kingdom, I feel it hurts us all if we do not support the circle of life that we are part of. Our joy is each other, and for me that extends to animals, either in the wild or in the domestic space.”

10. She Would Love To Tell The Story Of Agatha Christie

Throughout her career, Alice has been a part of some very successful film and TV franchises, and she already has her eyes set on another one. She would love to tell the story of the well-known mystery author, Agatha Christie