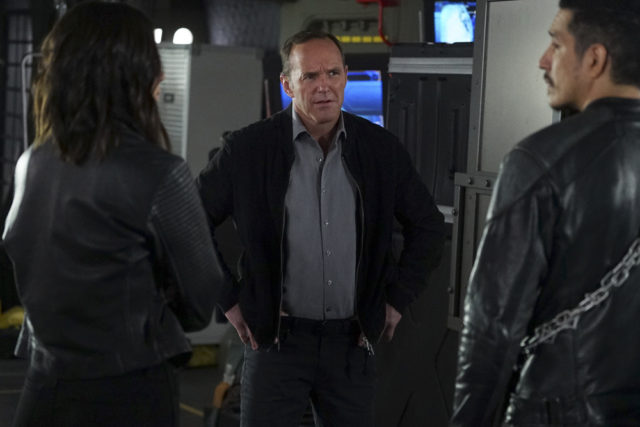 Agents of SHIELD has done a brilliant job with it’s Framework story arc in the second half of season 4, which has rounded out things in last night’s finale with “World’s End.” The entire season took the sow to a new level by delivering one of the most satisfying full season arcs since SHIELD originally came onto television. The Framework arc has delivered pretty much everything comic book fans could want while also still providing great character growth, story development and full-throttle moments. SHIELD has always been a show full of inconsistency, but the fourth season has really done a nice job of delivery a quality television show.

Although SHIELD utilized last week’s penultimate episode to finish off a decent amount of it’s stories, the show had a nice chunk of cleanup to accomplish before heading into the off-season. The main character in question has been Ghost Rider a.k.a. Robbie Reyes, who disappeared during the season’s second half. While it was definitely no shock to discover Robbie was returning for the finale, having Ghost Rider back was a really fun part of the show. Ghost Rider pretty much returned to serve the single purpose of getting the Darkhold back and taking out Aida in the process; however, the always awesome action that comes with Ghost Rider is more than welcome. Even though Ghost Rider provides fun visuals, his return also serves a larger purpose with a greater meaning. The character has always been the “Spirit of Vengeance,” which is something that SHIELD highlighted and explained, but the show definitely could have included more of it. Having Robbie return because the Rider was after Aida brought everything full circle and what Ghost Rider’s purpose truly is. “World’s End” finished off the character’s story on the show super nicely and is probably the best character that SHIELD has ever brought to the screen.

Yet, the one thing that Ghost Rider can never replace is the established strength and connection that the SHIELD members share with one another. The Framework has put all of these beloved characters through some of the most strenuous and extreme situations they have ever experienced. “World’s End,” has everyone still dealing with the aftermath of coming out of a false reality, and it’s clearly taken it’s toll. The biggest struggle has been with Fitz and Simmons, who will go into the final season with huge question marks surrounding their relationship. It has always been frustrating to watch the two soulmates fail to find happiness, but the Fitz-Simmons relationship has always been inspiring because the characters eventually find their way back to one another. “World’s End,” seemed to reveal that this will be the toughest challenge that the couple has to work through, which is completely understandable but also devastating.

SHIELD has created some great dynamics though, which is why seeing Fitz and Simmons both have to deal with the fallout from the Framework is so tough, but the show also finished off Season 4 with some bright spots. The biggest character left in question going into last night’s episode was Mack, who chose to stay behind in the Framework because he could not grasp the concept of a life without Hope, his ten year old daughter. Mack’s dedication has always been a great characteristic for him, but seeing him as a father was a really, really amazing additional layer of depth. It was always clear Mack had a huge heart, but SHIELD having him physically acting as a father on-screen elevated the emotional side to his story. It was heartbreaking to see him stay behind (no thanks to Daisy, making 0 efforts at all to inform him he had a life partner waiting for him), leaving his fate up in the air. “World’s End” really didn’t make anything better because Y0-Yo was now in the Framework as well, and both characters had to watch Hope disappear as the Framework came crashing down. The story for Mack and Yo-Yo was probably the best part of the episode, but what really solidified this was the mutual compassion and understanding each character displayed from their final moments in the Framework to after they escaped.

Agents of SHIELD has been a show with many ups and downs over the years. While at first it seemed like the show didn’t have its own identity, sticking with these characters has finally felt like it’s paid off. “World’s End,” did a nice job of closing this season out, and while it felt a little underwhelming at points because it was somewhat of a part 2, that did not stop the episode from packing in almost everything would want out of a season finale. While a lot of moments definitely felt underwhelming because of their predictability, the show really packed in a ton of action and emotion that led to a satisfying end, and it will be nice to see SHIELD return for a final season (hopefully going all out in space!) to deliver satisfying goodbyes for all of these characters.

– Wow, absolutely loved that finish for Mack’s story and the strength in his and Yo-Yo’s relationship. So happy that Mack was able to come out from that tragedy with such a strong attitude, only increasing the bond between him and Yo-Yo.

– Ghost Rider chain upgrade to sling ring is pretty damn cool. Could he be taking the Darkhold to Doctor Strange? WHAT DOES THIS ALL MEAN?!

–  Super happy that SHIELD didn’t pull any teasing BS with someone being created from Aida’s human making machine. I know a ton of the fans were hoping to see an opening for favorites Ward or Trip to return after a brief reappearance

– Once again, please, PLEASE, move Ghost Rider to Netflix. Then eventually put together some type of Thunderbolts or Defenders Dark series with a team that consists of Punisher leading, Ghost Rider, Blade and someone else.

– Excited to see where they take SHIELD for it’s final season… SWORD? Atillan? Who cares, just go all the way for the final season at this point.