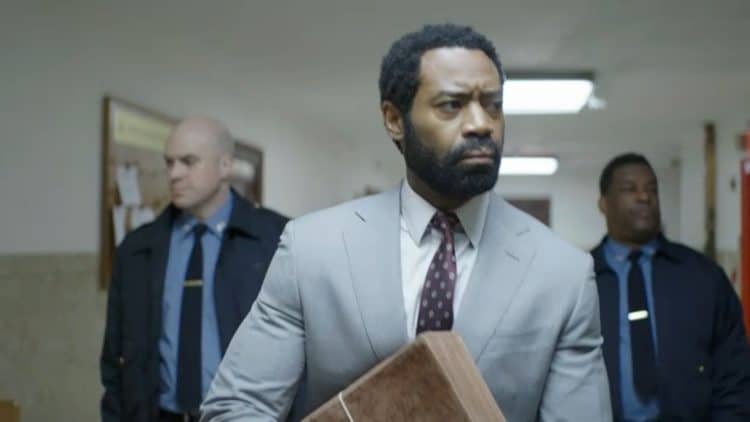 Aaron Wallace played by the British actor Nicholas Pinnock is the main character in the ABC series For Life which follows the life of an African American man serving time for a crime he didn’t commit. Wallace former friends conspired against him and ended up taking the fall for a drug crime that got him over twenty years in jail under kingpin status. The series is inspired by the story of Issac Wright Jr the first man to ever receive a life sentence for drug distribution. In this show Aaron Wallace is a powerful character that has massive influence. Here are 6 reasons why Wallace is an admirable character:

What are the chances that a man serving a life sentence actually becomes a licensed lawyer?  Situations like this don’t happen often if at all. After countless legal disappointments Aaron decided to take matters into his own hands and decides to study law so that he can eventually exonerate himself. A loophole in the law allows him to become a paralegal and sit the bar in New York. When he passes the bar he actually obtains his license to actually practice law.

2. Aaron used his law license to help other inmates

While in prison Aaron uses his law license to fight for other inmates just like Issac Wright Jr. did. This is really selfless of him. After spending over a decade behind bars you would think that Aaron would just focus on working on his case so that he could get home to his wife and daughter. However, Aaron couldn’t ignore the injustices within the legal system and he felt compelled to help other inmates with their cases. In the first episode, Aaron sought the help of his wife who is a nurse to win his case. He asked her to look at a suspect’s medical record which is a HIPPA violation. Although he won the case he put his wife career at risk. While this may not have been the best decision it shows how invested he was into his clients case. Aaron didn’t get paid to be any of the inmates lawyer. All his hard work was in the name of justice.

3. He Loves His Daughter

Being a good father was always important to Aaron and even though he spent the majority of his daughter life behind bars he made sure that he was present as best as he could. He talked to his daughter all the time on the burner phone he had and even made sure his wife brought her to visit. When he found out his daughter was pregnant his sense of urgency for getting out of prison increased. He wanted to be there for the birth of his grandson. Despite his situation it’s obvious that he was a good father because his daughter loves him to death and greatly respects him.

4. He didn’t give his wife a hard time about moving him

When Aaron was arrested him and his wife were madly in love. She always stuck by his side even when everyone them doubted his innocence. When she started seeing his best friend he had every right to be angry at her especially since they weren’t legally divorced. Aaron continued to show her respect and love as her relationship with Aaron’s best friend began to progress. After being in prison for fifteen years Aaron knows that it’s only right that she moves on. It definitely takes a strong man to watch the love of his life build a relationship with his friend.

5. Aaron in his righteous

It’s difficult being a lawyer and a prisoner at the same time because Aaron is expected to maintain a certain code of conduct in order to keep his law license. At times he’s asked to do criminal things by menacing bullies in the prison. Even when it’s difficult he always does what’s right. Aaron is really close to the warden of the prison. The warden respects Aaron and trusts him because of his moral steadfastness. When Aaron is told to betray her by the leader of a prison gang he refuses to do so. Aaron is a great example that when you do things the right way it always works out in the end.

6. Aaron is a great lawyer

Despite getting his law degree Aaron is actually a great lawyer. He wins about 90% of his cases which is a very high success rate. When he gets a case, Aaron dedicates so much of his time studying the law and getting the help of his soon to be wife to do footwork on the outside. Nicholas Pinnock does such a great job at reenacting the story of Issac Wright that it’s easy to forget that your watching a legal drama. Hopefully, this show gets picked up by another network by the end of the year.