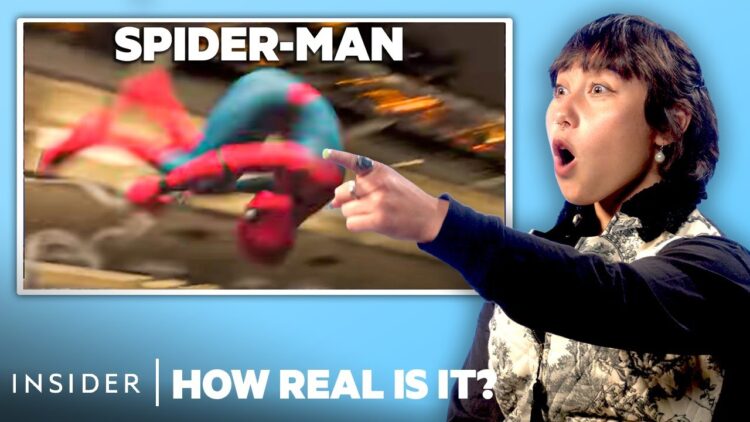 Watching gymnasts flip and twist all over the place is impressive when one sits down to witness what they can do upon reaching a certain level of skill. But in the movies, it’s fair to say that a lot of what gymnasts can do is exaggerated and doesn’t come off as that realistic. But when viewed by an actual gymnast, and one that’s been highly skilled for many years, one can imagine that she knows exactly what she’s talking about and can trust that she’s going to pick up on a few things that the average person might not. Some might think that Katelyn would rip apart every movie that she sees, but she does her best to explain what’s happening without really laying into any of these selections. A couple of them that she was amused by, interestingly enough, were Stick It and The Amazing Spider-Man. It’s interesting but not surprising to realize how much gymnastics and cheerleading have in common since they’re both high-energy activities. But saying that they’re the same would be inaccurate since while they can complement each other, both activities are very different.

Stick It is actually a fun movie that other gymnasts have looked at and remarked over in about the same way. There’s a lot of style and attitude in this movie, but that does kind of detract from the overall feel of it since when one gets down to it, gymnastics is a very technical sport, and the judges are quite harsh on their critiques since points are often deducted for aspects of a routine that many people can’t begin to understand. Katelyn does point this out, and she is right about pretty much everything since there’s not a lot of room for error in this sport, especially when it comes to a final routine. The training that gymnasts undergo is usually intense enough that by the time competition comes around a competitor will be ready and capable of blocking out just about everything other than what they need to be doing at the moment.

But given the danger of this sport, and it is dangerous to be certain, many people still find it rewarding when they get into the swing of it. But where the movies tend to embellish a little too much at times is when they show the flourishes and attitude-based movements and exaggerated nature of the sport. This is pretty typical when it comes to Hollywood since the flash and pomp that a lot of movies are given is done to make sure that people are going to be entertained and will keep them interested in seeing more. But sometimes the addition of elements that make something appear as more than what it really is can muddy the main point of the sport. One could say that Hollywood is all about entertainment, that it’s simply there to make a person laugh or watch in awe, but there are a lot of people out there that want to see the type of lifestyle they’ve selected for themselves represented in a realistic way. Most folks will state that of course it’s supposed to be entertaining, but they’ll still want to see some realism here and there.

By no means does this indicate that a movie should be 100% technically sound since there are many cases in which this would be kind of a snoozefest in comparison to the dramatic, comedic, and highly entertaining movies we’ve seen over the years. But getting a few technical details rights to make certain that gymnasts aren’t seen as superhumans would be nice since what these athletes do is insanely impressive, but it’s by and large possible for a huge part of the population if they decided to try it. In other words, gymnasts could be a dime a dozen if enough people were interested in acquiring such skills, but the fact is that while gymnasts aren’t rare in this world, they’re still highly-trained individuals that acquire their skills through a great deal of training and self-sacrifice, and it’s nice to see when the movies pay homage to that by keeping their abilities realistic, but also allowing the stress they’re under to be shown in some way during the feature.

It’s typically a lot of fun to watch these Insider videos, even though there are times when it can ruin the movie magic that Hollywood employs so readily. But when looking at it in terms of finding out what’s real and what is make-believe, it’s very easy to think that some folks might miss the distinction unless they go looking for the truth. Luckily, these videos continue to be a great way to parse fact from fiction, even if they don’t always give as much detail as some folks might want. That’s what a Google search is for, right?