Home
Television
A Clerks: Animated Series Revival Might be in the Works 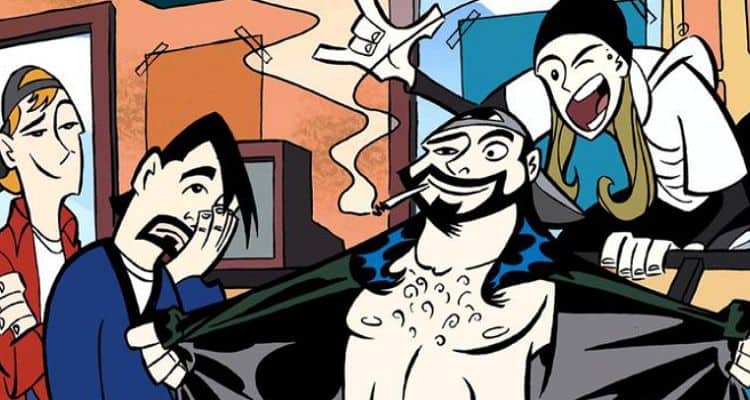 It’s actually been 20 years since the Clerks animated series was first released if anyone can believe that, and it sounds as though Kevin Smith is making a run at bringing the popular series back since animation is about the only thing that’s able to be done right now considering, as Jeremy Dick of MovieWeb mentions, it can be done from home. Smith has also been working on the script for another live action Clerks movie as well as Twilight of the Mallrats, a sequel to the original that will go into detail about the decline of the American mall, in its own way. While a lot of people might not even remember that Clerks had an animated series, those that do will no doubt excited to hear that new episodes are coming and are bound to be showing up before the end of the year. With production being down the only thing that can be relied on right now is content that’s already been finished and is simply waiting to be released and animation that can be done from point A to B from home. It’s going to be interesting to see how much of a mad scramble might occur if the studios do get to open eventually and things get to kicked into high gear. Hopefully Smith will continue to push the animated series without thinking about abandoning it for his other projects.

This kind of makes a person wonder if the Clerks animated series is going to change at all to keep in line with the manner in which the characters have been seen to change as well, as Dante and Randall went through a bit of a process in Clerks 2 which would be nice to see in the series, even if it’s not holding to the same exact story line. Given that so many things can happen though between live action and animation it’s easy to think that the animated series will remain just as crazy as it was in the first place. Fans will no doubt be happy to hear that the gang will be getting back together for the series at least, though there’s still an idea that Clerks 3 could happen, despite the idea of wondering why since it does feel as though Clerks 2 ended on a decent enough note, even if Dante and Randall were stuck back at their old jobs once again and Dante had a baby on the way with his new girlfriend/fiance and former boss. Marianne Garvey of CNN had more to say on this matter. One would think that Smith would leave well enough alone at some point but that’s obviously not the case as was proved with the Jay and Silent Bob reboot. It almost makes a person wonder if he’s thinking of reviving Dogma at some point. Of course he might have to find someone else just as convincing as Alan Rickman since he played a perfect part.

All in all though Kevin Smith has come a long way from his beginning and has established a massive fan base that is usually beyond excited to see anything that he has in the works. If he was to ever create a Star Wars script that was approved, if he had the time and energy to do such a thing, you can just imagine that people would be going mad with excitement. For all the pop culture knowledge that he continually flaunts and shows in his projects it’s not beyond him to take on something even more grand than he’s already done, but it also feels as though he might take a very different direction with a Star Wars movie if he was ever given the go-ahead to do such a thing. For right now it’s good enough that he’s still doing his own thing and rocking it as only he can, but somehow, some way down the line it might actually be kind of interesting to see if he could really stretch out and do something that might challenge him just a bit, if he would ever consider doing it that is. One has to remember that Smith has done so much in his career at this point that he really doesn’t have anything to prove to anyone and as a result is pretty much untouchable in a lot of ways. That could be why criticizing him is simply too hard since a lot of people won’t listen at all and might even go hard on those that are doing the criticizing.

Let’s be fair and say that Kevin Smith and his creations aren’t for everyone as a lot of people might not get his sense of humor or think that what he does is all that funny. Some of us have come around throughout the years and others loved it from the start. But when it comes to Clerks, one of the ideas that made Smith famous in the first place, it’s bound to be his go-to idea that will always work.