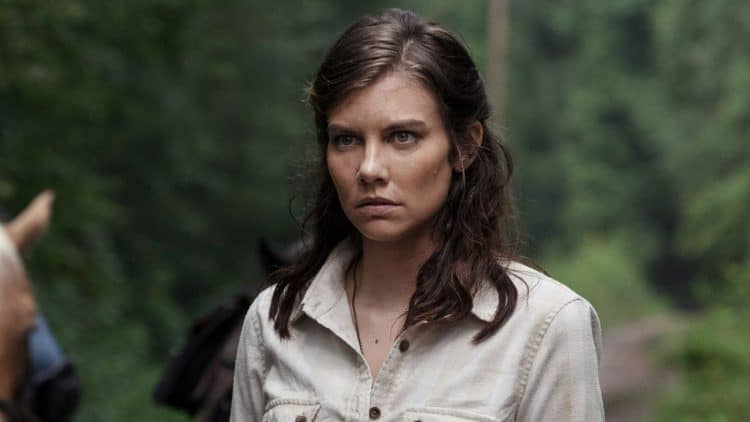 Like most characters on The Walking Dead, Maggie has tremendously evolved over the last few seasons.  We’ve watched her experienced great loss, be put into major leadership positions, and perhaps the greatest of them all; become a mother. In Season 11 of The Walking Dead, the producers tease Maggie’s death which puts fans of the show in an uproar. How valuable is Maggie’s character? Here are eight reasons why we believe Maggie’s character is valuable to the show.

1. Maggie Is An Empowered Woman

Maggie has come a long way from the sweet farm girl she used to be in Season 2. Over the years, Maggie has learned how to adapt to whatever life has thrown her way. Her tenacity to help people has turned her character into somewhat of a hero. Maggie has shown incredible strength even in the wake of loss. Let’s not forget that Maggie ran the hilltop while she was pregnant. In Season 9, she even decides to leave the safety of the Hilltop to find more survivors and build a community of her own with her son. Maggie is a leader by nature, and it’s not every day we get to see such strong examples of female leadership on television.

Fans also love Maggie’s character because they feel like she is relatable. She’s a young woman trying to survive in a world that has gone haywire. Maggie has lost her husband Glenn, father, and sister, but she is still fighting to survive. Maggie represents the everyday woman who has been through trials and tribulations but keeps on pushing forward.

3. Her character always tries to do what’s morally right

In a world where right or wrong doesn’t seem to matter anymore, where laws don’t govern people, Maggie still sticks to a code of ethics. Her character is always trying to do what’s morally right. Perhaps one of the biggest ethical decisions Maggie had to make was to decide whether she should allow the captured Saviors to live. At one point, the saviors were their biggest threat. They were a group of monsters that threatened humanity. However, Maggie listened to Jesus when he reasoned that killing them would make them cold-blooded killers just like they were. In a previous season, Maggie even deliberates over the fate of a man that Gregory sent to assassinate her. You would think the answer was obvious, but of course, Maggie’s character always chooses to do what’s morally right despite the consequences.

Maggie was a good wife to Glenn. Maggie’s love for Glenn was one of the reasons we fell in love with her in the earlier seasons. She knew Glenn’s potential and even advocated for him to Rick when it came to giving him more responsibilities in the group. Maggie knew that Glenn was capable of more than simply gathering supplies. Maggie and Glenn’s love story was beautiful, and it was unfortunate that Negan ended up taking his life.

Maggie has been a major character in the series since Season 2. She briefly departed from the show in Season 9, but she’s back in full-fledged in Season 11. We love great characters with longevity, and with Rick’s recent departure, it feels good to have a long-time cast member still hanging in there.

Maggie ran the Hilltop throughout her whole pregnancy. Running a community is a big responsibility. After all, she was in charge of keeping everyone safe and ensuring that there was enough food supply to keep everyone fed. Maggie was a valuable asset to the community even under Negan’s rule because of her intelligence. Even though Negan was a self-absorbed jerk, even he recognized her value.

Like the original comic series, we don’t actually get to see Maggie give birth to her son. Season 10 is a time jump, and when Maggie does make a brief appearance, she has her little boy in tow, who she has named Hershel after her deceased father. Maggie is successfully able to balance motherhood and being a badass hero.

8. Maggie is no longer afraid to do what needs to be done

Maggie’s moral compass has sometimes caused more harm than good. In Season 11, critics claim that Maggie is an antihero, but that’s not true. After killing a group of bad men who terrorized, tortured, and deformed a slew of women, Maggie realizes that not everyone deserves a second chance. Yes, Maggie has lost some of her optimism. Now she knows that as a leader, you have to do things you aren’t proud of in order to benefit the greater good.