Home
Television
NCIS
NCIS Review: A 300th Episode to Be Proud Of 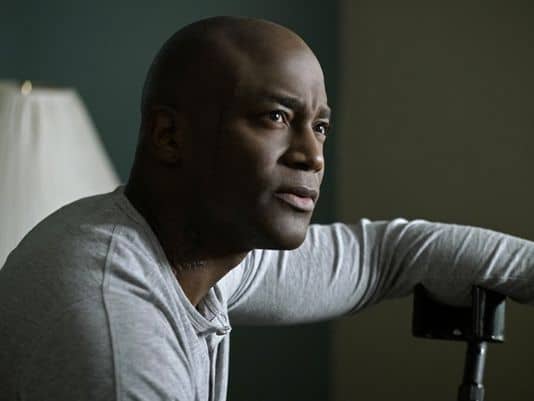 After thirteen seasons of NCIS, the number one procedural drama in the world reached its milestone 300th episode. Special guest star Taye Diggs helped commemorate the occasion with a strong storyline with Agent Gibbs. There was death, there was recovery, and whole lot of heart.

We open in Iraq where an American couple, one of whom is military, is assassinated by a sniper. By the time news reaches NCIS, the military in Iraq are extremely concerned because the sniper rifle which was used as the murder weapon was more advanced than anything ordinary Iraqi insurgents could ever get their hands on. In fact the sniper was so fast and so accurate it’s unlike anything they’ve ever seen. The special prototype sniper weapon with incredible range is actually an American model which was unknowingly stolen from a convoy involved in a firefight six months prior. The only survivor of the firefight is Gunnery Sergeant Aaron Davis, played by Taye Diggs.

Gibbs tries to ask Dr. Grace Confalone at Walter Reed to talk to Davis, but she refuses, insisting that Gibbs talk to Davis himself. Davis wants nothing to do with Gibbs or his investigation. Being a sniper himself, Gibbs’s strategy is to sit and wait until Davis is ready to talk. Davis’s daughter Riley is brought in and she explains to NCIS that her father loves music, which gives Dr. Confalone the idea of enrolling Davis in MusiCorps, a group which helps wounded military with their recovery through music. Turns out Davis has already been going to the practices, he just doesn’t participate. Back at the office things get complex when one of the victim’s passports is used to get the killer into the country, and the sniper rifle with him. So now the killer and the sniper rifle are in the United States with a new target in mind.

Gibbs’s stubbornness and patience pays off. Davis describes the moments during and after the attack, and tells Gibbs the rifle that was taken had to have been his. He also tells Gibbs that he heard whispering but it sounded like it was 90 meters away. Abby figures out that this could mean the attack was recorded, and hopefully the evidence is still at the site. By the time NCIS figures this out, Davis is gone. When Gibbs catches up with him, he and Davis talk about Davis’s daughter Riley. Their conversation is the first thing that finally gets through to Davis after months of numbness. If he’s going to get better for his daughter, he has to figure out who he is now, not trying to be a robotic version of who he was.

Gibbs hasn’t been sleeping well, and it’s slightly noticeable. The rest of the team slightly annoys Gibbs while Abby thinks the solution is for Gibbs to wear a Coffee Helmet. The case has Gibbs thinking about his own experiences and recovery as a sniper. Watching Davis struggle with his PTSS, and their mutual connection as snipers, has an effect on Gibbs. NCIS figures out that the sniper is targeting a local airstrip and Gibbs is the first one out the door. For three days Gibbs and the team stakeout the airstrip waiting for the sniper’s target to appear. It is a Saudi official who works closely with an American oil company, and given the messy repercussions of that plane being targeted, Gibbs and his rifle are on high alert. Gibbs shoots down the sniper, and is finally able to sleep in a bed again. As for Davis? He finally begins to find peace, and it starts with a powerful rendition of “Hallelujah”.

Davis’s daughter Riley offers some advice to NCIS as well. DiNozzo’s life has become very sad. He plans to use a gift certificate to a fancy Italian restaurant his Dad got him with a random dinner date. After Davis’ daughter says “It’s all about family”, DiNozzo decides to share his gift certificate with the other men in NCIS, his family. After Riley notices ketchup from a burrito Delilah made McGee, he realizes just how much this woman must love him. The next shot we get is McGee shopping for an engagement ring.

For more information on MusiCorps, go to www.MusiCorps.net, and tune into NCIS Tuesdays on CBS.