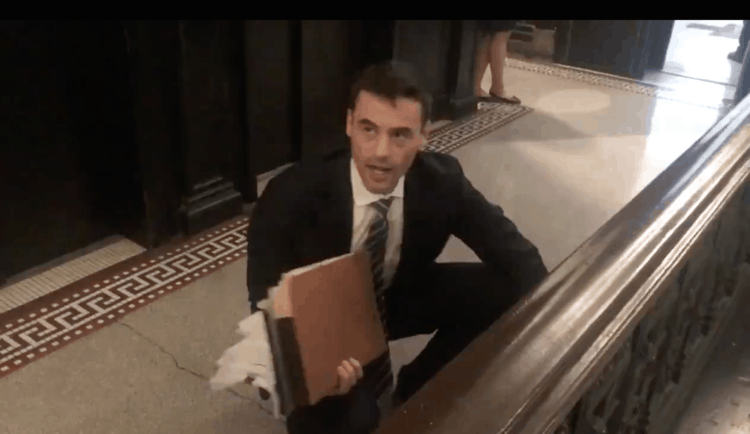 There are times when a person can say or do things in the heat of the moment that might not seem wise when they’re viewed in hindsight, but the idea that they didn’t mean them at the time still doesn’t lessen the sting. Aaron Schlossberg is someone that might have been able to skate under the radar for the rest of his life had he held himself to a higher standard as is kind of necessary when one has been well-versed in the law and is bound to uphold it and be a representative of it. That might not seem fair since people are only human after all and we all have bad days from time to time. But like it or not there are expectations that are held for those that represent the law and Aaron seem to have forgotten that fact a while back when he decided to lose his cool in a local eatery. What happened after though has been following him ever since.

Here are a few things you might not have known about Aaron, or the trouble he’s gotten himself into.

10. He got in a bit of trouble when he told a couple of people speaking Spanish to speak American.

As mentioned above he got into a dispute with a couple of people in a local cafe, diner, whatever it was, and was videotaped getting verbally aggressive towards someone for speaking Spanish to a customer that they happened to know. I mean how dare they, right? Do note the heavy layer of sarcasm.

9. Aaron was kicked out of his law firm.

It’d be kind of interesting to hear just how book sales have been going in the wake of the snafu that he created, whether he’s been able to see any more profits from it or not. It’s very likely that people will still pay attention to him and his work, but then again a lot of people back those that many revile for their own purposes.

This is kind of damning in a way since it states on his bio that he knows Spanish, so it would seem that he could have easily dismissed the incident by ignoring those that were minding their own business and waiting politely to speak to the person about what he needed. That ‘heat of the moment’ idea is a great excuse when someone’s having a bad day, but it doesn’t hold a lot of water when someone’s just being ignorant.

6. He deals mainly with commercial and insurance disputes.

One has to wonder how many people are still coming to him now that this has been released in so many different ways and he’s been raked over the coals and through the mud. At least one can hope that the metaphorical substance he’s being dragged through is mud.

5. Apparently Aaron is a bit conceited.

It sounds as though he has no trouble throwing his education around and in peoples’ faces when he’s challenged or even spoken to in a manner that he doesn’t like. The one thing about being educated is that if one feels the need to bring it up constantly it shows that they may very well have a piece of paper proclaiming their intelligence, but there’s nothing to say that they’re all that wise.

4. People have been calling him a racist quite often as of late.

This might not be the case since this is a word that gets tossed out as a bad habit far too often, but his rant towards the people in the video that went viral is hard to dismiss since he does threaten to call ICE on them at one point. That’s a very big case of ignorance mixed with arrogance, but not quite enough to label him as a racist.

3. He wasn’t well-known until the video that got him so much attention.

If not for this video he might have remained an unknown for the most part since his name doesn’t really ring a bell for a lot of people and doesn’t come up all that often. Even now if things ever die down he might have a chance to go unknown again.

2. Politicians have actually called for his disbarment.

This doesn’t seem likely to happen since he hasn’t really broken any laws but it’s still an enticing movement to fall in behind largely because this man represents the law in New York and he does need to be a little more professional.

1. He kind of made the situation worse.

Instead of immediately owning up to what he said and did Aaron ran and hid from reporters and those that wanted a little more explanation to get his side. Usually if you run it means that you can’t handle it and possibly know that you were in the wrong. That could be why his eventual apology sounds so hollow.

Yes, lawyers do need to be held accountable for their words and actions too.