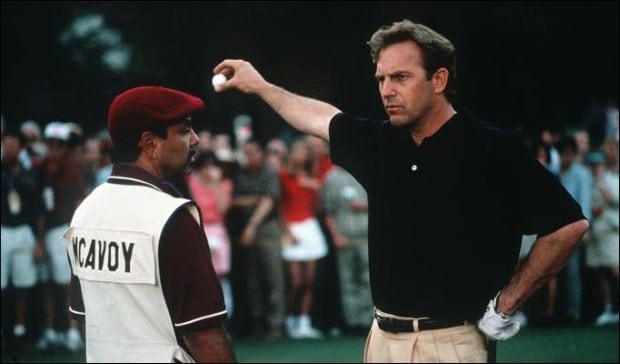 Tin Cup is one of the better golf movies when it comes to learning how to get out of your own head and just play the game the way you know it best. Roy is the kind of guy that Costner always seems to play, the hardcase whose luck fluctuates with his mood and who doesn’t lie down for anyone, not even when his best friends are trying to give him the advice that he so sorely needs. It’s the kind of role however that he was born to play since he does it so well. In fact if you watch some of his other movies you can see that he seems to play this kind of character very well.

Some people just find their niche and learn to play it.

10. While filming the crew had to make a water hazard since there was one called for in the script.

They named it Tin Cup Lake after the movie.

9. Costner did most of his own shots.

The majority of the golf shots that Costner hits in the movie are all him without any special effects or pros shooting in the background to make it look good.

8. Costner’s family appear in the film.

In the scene when Simms is yelling at the grandparents and kid the individuals are Costner’s parents and son.

7. The Waffle House argument is kind of irrelevant.

The reason it’s irrelevant is that while the claim is that it’s in Odessa there really is no Waffle House in Odessa.

6. Dennis Quaid regrets turning down the role of Simms.

He had a chance to take it and didn’t. It could have been because he didn’t think it would go anywhere but who knows.

He wasn’t really into the sport before taking on a role in this film. But once he got into it he became an avid fan of the sport.

Their characters are such polar opposites that you think they must tolerate each other at best, but in truth Johnson was selected to play Elliot Ness in the Untouchables. When he couldn’t do it he passed the part along to his good friend, Costner.

3. Don Johnson and Cheech Marin would go on to star in Nash Bridges the same year this film came out.

It’s easy to see that some actors get used to each other and want to stick around those they know to some degree as a kind of comfort thing.

2. This film was all about the low percentage shots.

1. Roy actually broke a rule when qualifying for the US Open.

Throughout his qualifier he was wearing headphones the entire time. Headphones aren’t allowed to be worn for an extended period of time so he shouldn’t have even qualified.

Sometimes life is all about the low percentage shots.