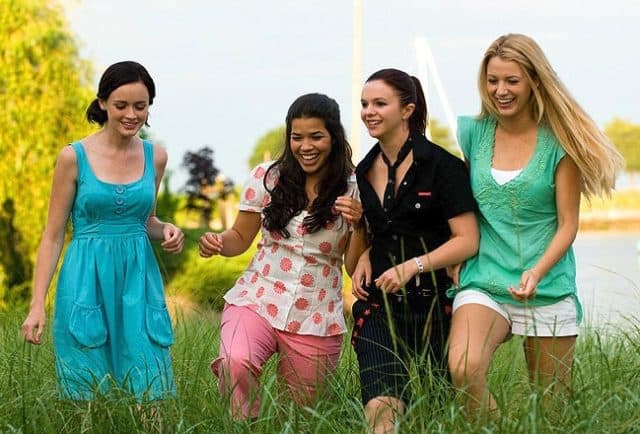 For a feelgood movie the Sisterhood of the Traveling Pants is considered to be one of the better ones. That could be why it got a sequel, and why a third movie is now being talked about as a possibility. Almost any movie that has a positive outlook on women and how their friendships develop over a period of time, no matter how it’s done, tends to get the attention of the audience. The touching, human way that people deal with each other and the drama that leads towards greater understanding and reconciliation of what it is to be human usually gets a good deal of attention since it reminds people of how they’d really like to be around one another.

Drama sells just as much as anything really.

10. Blake Lively’s father plays her father in the movie too.

That might make it difficult to know when your daughter is acting or is really responding to you, but then again a parent can usually key in to when their kids are being genuine.

9. The director didn’t use the standard “action” to get the film rolling.

Instead he used language that was a lot more passive and allowed the cast to relax and just get into the groove of things. Unfortunately this also left him open for friendly mockery by the cast and crew as well.

That little fact seems to get lost in the shuffle since the effect of the jeans is typically more important than who made them. At the very least it deserves a mention.

7. Lively’s character is supposed to be the oldest but in reality she’s the youngest of the group.

She’s younger than the others by a few years yet she’s supposed to be the oldest. Through some clever story-telling and plot use she manages to become the eldest of the group.

6. Several parts of the film were shot on a sound stage.

Since they were filming up in Canada and it was a bit cold during that time some of the scenes had to be shot on a sound stage so that the actors wouldn’t freeze or otherwise be unable to get the shot that was needed.

5. This was Blake Lively’s film debut.

As you know she’s gone on to do several other projects since and has become something of a known woman since she’s taken on a few roles that were decidedly popular.

4. Hillary Duff was interested in a part in the movie.

This would have no doubt been the kind of movie that people could really see her excelling in since she’s been thought of as a friendly face for a long time.

3. Bradley Whitford kept doing improv during the dinner scene, which made it very hard for everyone to keep a straight face.

There’s almost always someone on set that’s going to be trying to make people laugh. It’s an endearing quality actually that’s usually appreciated since it helps break any tension.

2. The house that was going to be Tibby’s house had to be changed.

The owners decided that they didn’t want a bunch of people coming in and out of their home at all hours.

1. All four of the girls have had roles in TV shows at one point.

Even after the film the girls all found places in TV where they could shine.

It’s a great movie for those that love stories about endearing friendship.