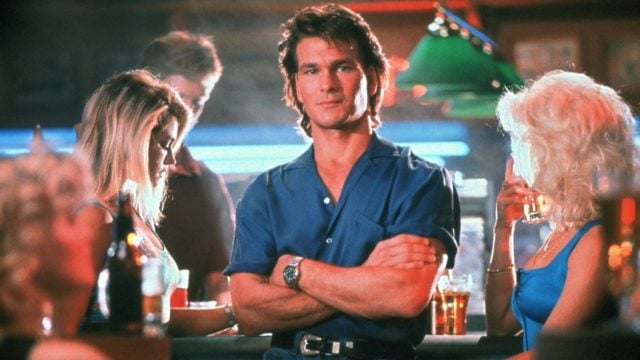 Road House was the type of movie that you could watch over and over and never get bored. Ah, back in the day when guys like Patrick Swayze and Sam Elliott were still awesome and there was apparently still such a thing as a Cooler, basically a head bouncer that was responsible for all the other bouncers in the bar. The one rule? Be nice. And if the situation escalated to the point where you couldn’t be nice, then you took it outside. Swayze was absolutely awesome as Dalton and was a little more realistic since he wasn’t the Seagal kind of fighter that just took guys out in a few punches and suffered absolutely no damage for it. With Elliott as the wise mentor and Swayze as the Zen-like bouncer this movie was one of the many that made the 1980’s a cool decade.

But of course no matter how many times you watch it there are bound to be a few things you didn’t know.

10. Swayze was trained by an actual kickboxing champion.

His name was Benny Urquidez and he held multiple black belts in several disciplines. He trained the entire cast, or at least those that were supposed to fight.

9. Swayze was approached to play a part in Predator 2 thanks to this film.

Unfortunately due to a knee injury he sustained on the set he wasn’t able to say yes, nor was he able to take a part in Tango & Cash.

8. An off-Broadway version of this film was created.

It had a ridiculously long title that I won’t bother repeating and it starred a guy that had to wear an equally ridiculous blond mullet.

7. Patrick Swayze sang two songs for the soundtrack to this film.

It’s a little hard to imagine Patrick Swayze belting out a tune but he did so twice for this movie, he even wrote one song.

6. Swayze joked that he wasn’t sure he’d survive to the end of the movie.

Considering the fact that he did all his own stunts, reportedly, it’s amazing that he wasn’t severely injured in some instances.

5. A lot of the casts’ names are taken from the names of wild west bandits.

Kelly Lynch was under contract but almost lost out until it was discovered that Swayze and Bening didn’t really have that great of chemistry.

3. The sequel turned out be a completely different movie.

None of the original cast came back for the sequel. I can’t really blame them, all that needed to be done was done in the first movie.

2. Several of the sets were built just for the movie.

The Double Deuce, Red’s shop, and even the front portion of Emmett’s barn were built specifically for the film.

1. All the actors did their own stunts.

This seems like it might have cost the studio more if an actor had gotten hurt on the job than it might have for stuntmen, but the same guy that was teaching Swayze taught the rest of the cast as well.

It might have been voted as one of the best worst movies of all time, but it’s still an awesome movie all around.