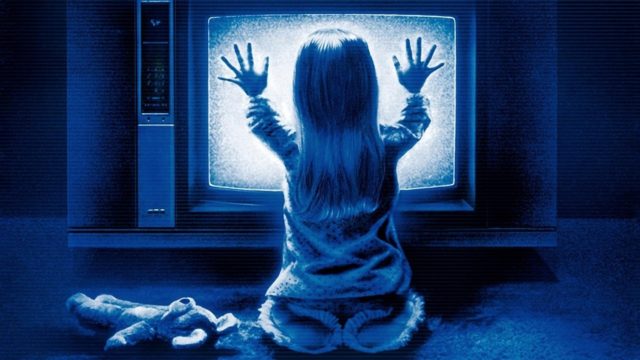 Theeey’re heere. Hands down this had to be one of the creepiest movies ever made and that’s saying something. It wasn’t even the fact that it was meant to be a horror flick, it’s that it used such subtle methods to really draw the moment out and make you wonder just what angle the horror was going to come from. When it did strike however, when the poltergeists finally showed what they could do, things got intense very quickly and the Freeling family suddenly found out that their home was anything but safe. When an unknown presence targets your youngest child and begins to turn your home into a prison that you can’t escape it might be time to start worrying.

Honestly, how many people jumped when that demonic tree started moving?

From the point when Steve and Diane are in the kitchen talking about the weird phenomenon to the moment they are seen on the neighbor’s front step they are cut off in mid-sentence each time. This has to do with a line that offended another prominent company.

Steven Spielberg considered her for a short time and then went with Heather O’Rourke because of her more angelic countenance.

8. JoBeth Williams had to be convinced to do the pool scene.

She was nervous about all the lights and cameras around the pool, so Spielberg jumped in with her to ease her mind.

7. When Robbie was being choked the crew thought he was ad-libbing.

The scene in which the clown was choking him almost resulted in the actor being choked out for real.

As a child Spielberg had a very real fear of a tree outside his window and of clowns.

5. Out of all the scary scenes only one really got to O’Rourke.

4. The skeletons in the pool were real.

Nobody told JoBeth this until afterwards. Some people even thought that the cast was cursed after the use of real skeletons since the eldest daughter was killed after the films release and O’Rourke passed away several years later.

3. The house in the film is still standing today.

It’s in Simi Valley and it was most recently sold in 2009.

That would be pretty accurate since throughout the film the ghosts were being pretty active and disruptive. But typically poltergeists aren’t known to become violent.

1. Stephen King was approached to write the script.

This might have sent the movie off in an entirely different direction, but since he and the people in charge couldn’t agree to terms it never happened.

The movie spawned two more sequels and a remake, but nothing has ever managed to capture the same type of magic that this film found.