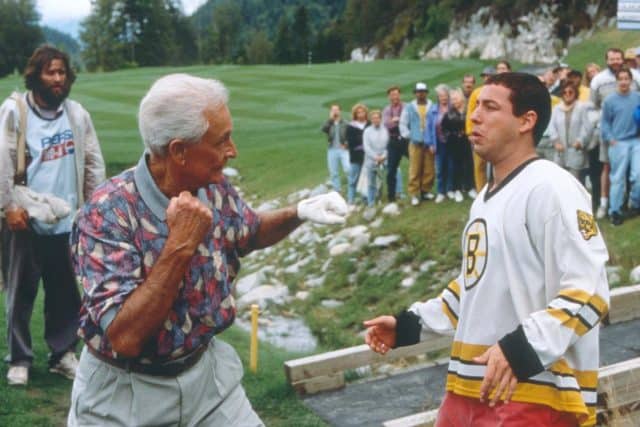 This isn’t the most traditional sports story in the world and people were glad for it. Happy Gilmore was the kind of guy that destroyed a sport in order to understand it, and when it came to golf he wasn’t the cultured and snobbish persona that some people seem to take on when they think about hitting the fairway. Instead he was the blue-collar golfer that wanted people to make some noise and get into it. He was to golf what John McEnroe was to tennis in a way, loud, brash, crude, and so into just having a good time that he didn’t care who took offense. That’s a big part of why the movie was so popular.

But did you know some of the little known facts?

10. Adam Sandler admits to being horrible at both hockey and golf.

He’s not too shabby at tossing around a football or at basketball, but he doesn’t seem to have the patience or skill for hockey or golf.

The role showed that he could play comedy and not always be the big, buff action star that people thought of him as.

8. The fact that Chubbs is missing his right hand is a nod to the Predator movie.

Remember in Predator when Weather’s lost an arm to the creature’s laser cannon? This is kind of an inside joke alluding to that.

7. The heavenly version of Chubbs also shows up in Little Nicky.

Not only does he show up but he’s good friends with Nicky’s mom, an angel played by Reese Witherspoon.

6. Kevin Costner was the first choice for Shooter McGavin.

As good as he is at acting it just doesn’t seem like he could have filled this role. He went on to star in Tin Cup anyway.

5. Bob Barker almost passed on the chance to show up in the film.

He was reluctant until he saw that he would be the one that won the fight, then he was in.

4. Bob’s appearance in the movie actually gave his show a ratings boost.

The Price Is Right experienced a very big ratings boost not long after the release of Happy Gilmore.

That’s kind of surprising seeing as he was in the movie for at least a moderate amount of time. You wouldn’t think that an actor of his caliber would have allowed this to happen, but oh well.

2. Bob Barker actually does know how to fight.

Bob Barker studied Tang Soo Doo karate under none other than the legendary Chuck Norris, so he could have easily whooped Sandler right then and there.

1. Christopher McDonald almost turned down the role of Shooter McGavin.

McDonald was getting tired of playing the role of the villain at this point, and just about passed on the movie. When he realized that he’d be working with Adam Sandler though he changed his mind since he realized just how hilarious the movie could be. It’s a good thing he did, because no one else could have filled this role.