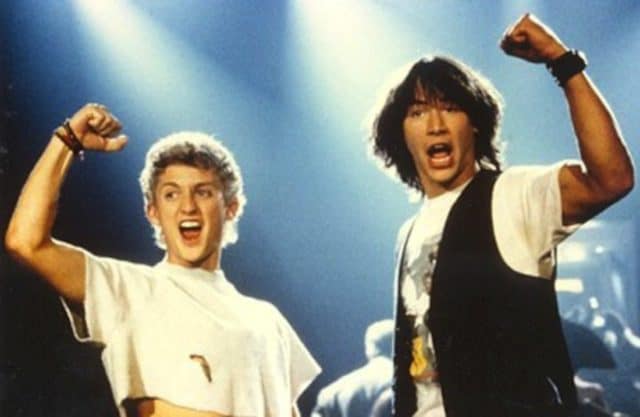 Let’s be honest here, not a lot of people knew what to think when Bill and Ted came on the scene. They were cool, they were edgy, but they were still kind of out there and not too bright. That of course was their appeal, they were the likable losers that nobody thought would amount to much of anything and somehow, against all odds, became a couple of guys that made it big and proved that they were worth the effort of listening to.

There were a few things that not everyone was made privy to about the film though.

10. The characters of Bill and Ted were born in an improv class.

The characters were made to be a couple of guys who knew absolutely nothing about history talking about history. It soon became an idea and eventually became a very real goal for a movie.

9. Pauly Shore wanted to be the character of Bill.

Shore was just one of many male actors that auditioned for the role and actually cornered the creator on an MTV shoot at one point about his failed audition. At least he went on to attain fame not long after.

The image of Bill and Ted was supposed to convey guys that wore heavy metal band t-shirts and tried to look tough but were still picked on relentlessly. Obviously the actors weren’t really fit for that image.

The director was initially thinking of someone serious like Sean Connery, but Carlin was kind of an afterthought. They also didn’t think they could get him initially.

6. They originally used a van for the time machine.

5. Somebody won the actual phone booth.

Nintendo gave this away as a promotion for their release of the Bill and Ted video game. The young man that won it apparently still has the thing today.

4. The script was written by hand and in four days.

Normally that wouldn’t be a good mark for any script, as these things take time to iron out. But apparently it worked.

3. The original idea wasn’t supposed to be scifi.

As much as the creators tried to fight it there just wasn’t any way to avoid this story being about time travel. Thankfully they didn’t fight it too hard.

The original financiers went broke during production, but Orion and Nelson entertainment bought the rights so that the movie could stay on the big screen for a while.

There’s a script and a desire to make the movie but as of yet there’s no set date on when it might begin or when it could possibly come out. It would be fun to see though.

A few of these facts were actually kind of surprising to be honest.