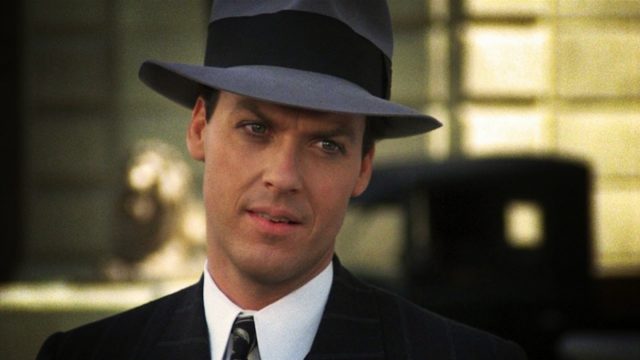 Michael Keaton has had kind of an up and down career the last couple of decades. He’s been one of the best actors around for a long time and yet he seems to have taken a break from time to time to get away from the spotlight and let things simmer. After Batman Returns for instance he kept acting but a lot of people didn’t seem to notice. The act of forgetting what films he’s been in however is kind of odd since he’s such a big personality that it’s hard to miss him.

Yet he does fade into the background now and again.

This is one that he might even want to forget about since it was such a horrible movie that people actually were pining for the original and its sequels. Something about bringing a movie like this back just doesn’t bode well for anyone that’s involved in it. But putting Michael Keaton in as the bad guy is a sure way to make people hate him since he can be particularly nasty when it comes time.

As a beloved sports star he’s at the top of his game when it comes to his lifestyle. But when Bobby Barbados runs afoul of a pint-sized would be mugger and his mother things start to change in ways that he didn’t anticipate. It’s when he really starts to care about them that things get really messed up, as his life becomes a series of events that finally leads him to taking a chance on something other than himself.

Nobody ever has enough time to do what they want and what they need it seems, but copying yourself again and again seems to be one of the worst ideas in the history of humanity. And when the copies make copies, hoo boy. This movie was funny enough to warrant watching but it was kind of at a low point in Keaton’s career and as a result didn’t garner a whole lot of attention or acclaim.

He played one of the most well-dressed and respected gangsters in all of film and yet while this movie had some fleeting success it didn’t last all that long since Keaton’s accomplishments tend to overshadow each other at times and Johnny Dangerously became a thing of the past the moment he was on to something bigger and better. Give him credit though, he’s always made a convincing comeback from the low points in his career.

Why this movie was ever forgotten is a mystery since it as funny as it gets and starred some truly great talent. Keaton took over a bit but this seemed to be mostly because his character was the most aggressive and didn’t hold back with anything he said. The rest of the cast played their parts beautifully and were on point as much as possible. Keaton however has the kind of energy and spark that just jumps out at a viewer from time to time and makes them pay attention.

He’s still great, no matter what.