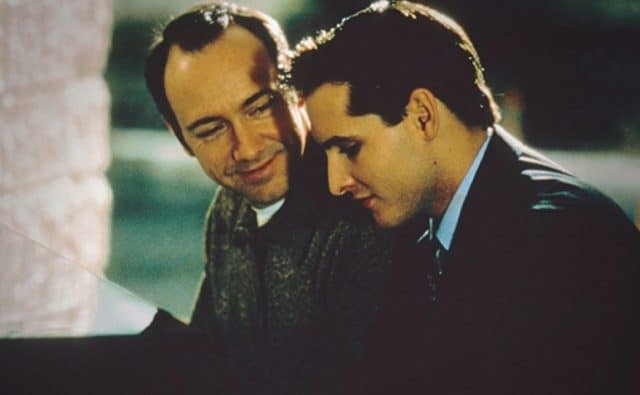 The Big Kahuna is a story all about three businessmen that are attempting to land a huge account that could make them all very wealthy people. Larry and Phil are old hands at this sort of thing while Bob is kind of a newcomer that has yet to really prove himself. But through a lot of wheeling and dealing Phil and Larry manage to put their fate in Bob’s hands, which goes slightly awry at first but seems to work out as the film reaches its close. It’s a story about the art of the deal as much as it is about learning to trust people and rely on someone else.

Kevin Spacey tends to either play roles in which he’s the seasoned pro or the hopeless dreamer.

10. When Kevin Spacey wears the hat in the ad he’s making a sales pitch.

This is one of the supposed big moments that people probably looked for when watching this movie since it was used in an ad to promote the film. Yet when it happens the music is playing over the dialogue so it’s hard to know what’s going on.

9. This is the first and only film directed by John Swanbeck as of 2014.

Some people just want to try directing on for size and find that it’s not for them. Others perhaps try it once and then decide they want a break to reconnoiter and then try again.

7. The majority of the movie takes place in a hotel room.

There are other locations but a good deal of the movie does take place in the hotel room that the three men share.

6. It was adapted from the play Hospitality Suite.

The director didn’t really bother to differentiate the movie from the play all that much. Maybe the criticism of this is why he didn’t want to continue as a director.

5. Almost every line is spoken by one of the three actors in the film.

It becomes apparent right away that the movie is all about the three men and as a result the dialogue is all their’s as well.

It really depends on how much a person likes this type of movie as to how they’re going to feel about it, since it’s not the action-packed type and it’s certainly not anything but business-driven.

3. It did not make its money back at the box office.

It just barely made half of its $7 million dollar budget back, which is less than a success in pretty much anyone’s eyes.

2. The movie received a 74% on Rotten Tomatoes.

This could be good or bad depending on how a person looks at it since Rotten Tomatoes is not really the best barometer for how a movie really is.

1. The big kahuna is defined as the most important person.

In the movie the Big Kahuna is the guy with the deepest pockets that can make or break a business.

It seems like an interesting movie if you’re into that kind of thing.