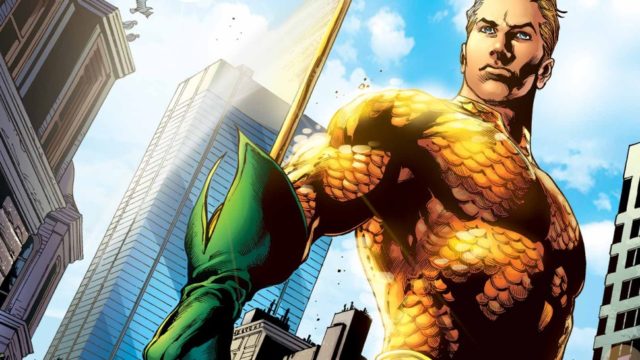 Within the super hero universe, we find able bodied individuals who come with distinct features and powers that make them truly one of a kind. As we have seen our fair share of different heroes make their way into the comic universe throughout the years, we have also seen quite a variety when it comes to these powers and features that make these figures unique and able to save the day. One of the most unique (when compared to the rest) is that of Aquaman. Since the 1940’s, we have seen many different appearances of the DC comic hero, along with the many bizarre things that make up his physique. We are here to count down to you ten of these strange facts that are about Aquaman and his heroic physique, so let’s get right to it.

1. He Can Breathe Underwater

Given that he is Aquaman, it is pretty understandable that one of his many special powers is his ability to breathe underwater. His stories as to how he attained this power are a bit unclear, as they have changed throughout the history of the hero; They have ranged from his father teaching him a specific technique to draw oxygen out of water for breathing to him being part amphibious.

2. He Has Great Super Strength

It is not an uncommon thing to see super heroes of all kinds exhibit some type of super strength, and the same goes for Aquaman. However, this is one of the powers that many fans don’t realize that he has. To the surprise of many, he is actually considered to be one of the most strong and powerful of the heroes that make up the Justice League in the DC universe.

3. He Has Superhuman Eyes

Aquaman is also blessed with some features and powers that not even some of the greatest and most devoted fans remember, and one of those are his super human eyes and eyesight. His eyes allow him to see up to about 36,000 feet below the water, and can also allow him to see in total pitch black darkness as well.

Again, his name clearly points out that he spends the majority of his time in the water. Given that in the current adaptations of the comic hero, Aquaman has amphibious genetics to his DNA; This, in turn, allows him to also have the ability to communicate with fish and other aquatic life. This communication typically happens telepathically.

How would Aquaman be the great underwater hero like he is today if he wasn’t able to swim at unbelievable speeds? This may be one of the more obvious powers that comes with his status, but in the DC universe, he is considered one of the fastest swimming creatures to grace the Earth.

Obviously, if you are a super hero that spends the majority of your time in water, you might not last quite as long with regular human skin. That is why, although not necessarily discussed in the comic universe, Aquaman has his own unique skin that allows him to withstand the pressure and other factors that come into play under the water.

7. He Was Able To Control The Weather

Fans of the comics will come to know that Aquaman is equipped with a trident, and with a trident comes the power of Poseidon. The trident is a weapon of great power, and allows for ultimate control of both the ocean/water as well as the weather, which tend to coincide with each other.

Along with his super eyesight, Aquaman also has super ear strength. By this, we mean that he is able to use sonar (echolocation) to hear muffled sounds, and sounds from great lengths, both under the water and on land.

9. He Can’t Live Without Water

Every super hero has a weakness built into their DNA — For example, Superman can’t handle Kryptonite. For Aquaman, he simply can’t live without water, and it seems pretty obvious, considering all of the other strange coincidences of his physique, why this is the case. However, he has been able to withstand longer periods of time on land without water in several different comics and other outlets as well.

Yes — When Aquaman comics were released in the ’90s, the super hero came out with a more robust and rugged look to him, featuring facial hair and muscles galore. It also came with a back story which ended up causing him to have one of his hands ripped off his body. Fortunately, as newer adaptations have been created and released, we have seen Aquaman come into a new light, and regain his hand once again.

It is clear to see that Aquaman has unique and amazing powers that allow him to truly stand out from the rest of the heroes that make up the comic universe. Now, super fans of the DC comic icon can look forward to the release of his own feature film, which is set to hit theaters come December of 2018. As we wrap up our count down of these strange bodily powers that make up the hero of Aquaman, you can keep them in the back of your mind as you watch this hero in action during his franchise films.