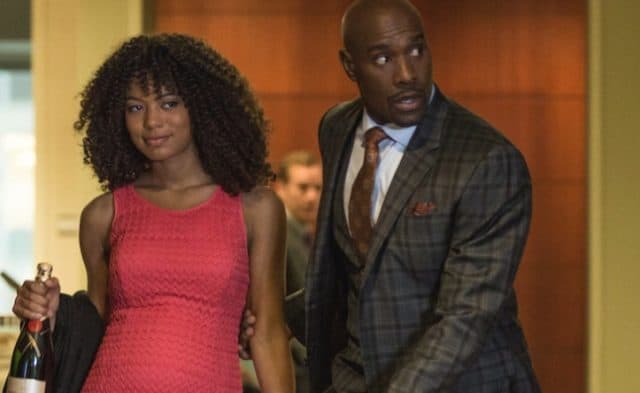 When the Bough Breaks might terrify anyone that’s ever gone through a surrogacy since the couple in the movie are depending on their surrogate to take care of herself and their baby as the wife in the relationship has tried and failed to bring a child to term. But when the surrogate mother starts leaning heavily on seducing the husband things get a little out of whack and she starts to threaten the baby, and then them. This kind of movie has been seen before but not with a surrogacy attached so it’s kind of a thriller for those that have always wanted children and had to work hard to finally get them. In other words if you’re still trying it might not be the kind of film you’d fully appreciate at first. But thankfully it’s not a common thing to happen during a surrogacy.

Here are ten things you didn’t know about “When the Bough Breaks:”

10. Three of the cast starred in the film Think Like A Man.

It’s pretty common to  get cast members to stick together from one movie to another as they tend to know how to react around each other and their onscreen chemistry is sometimes a lot greater.

9. The cast was brought together from November November 2014 to January 2015.

In a way it’s kind of like dominoes falling in line as the cast and crew get picked out for the film and finally meet and come together to figure out how the whole thing is going to go.

8. The film was shot in New Orleans.

The Big Easy isn’t the most popular place for filming but it does manage to show a lot of very attractive countryside and enjoyable city views.

7. It finished second in the box office during its release.

This might confuse some people but it was well regarded by some since audience members made it one of the top films at the box office.

6. It didn’t do too well with the critics at first.

It’s kind of odd to notice how critics will lambaste a movie when audience members tend to think that it was at least worth their time and money.

5. Rotten Tomatoes only gave the film an 11 percent.

If you follow and trust this site then so be it, but quite honestly it’s one of the worst critic sites out there in terms of how they rate movies.

It tripled this number at the box office thankfully and did pretty well when it came to the profits.

3. Some people thought it would have been better as a made for TV movie.

Once again this was mostly critics that had a lot to do with this kind of description and recommendation.

2. Morris Chestnut has been in other films where he’s seen as an object of desire.

He’s been quite a popular character in the past and has been cast in roles where he’s had women troubles before.

1. Regina Hall gained a large deal of fame for her part in the Scary Movie franchise.

She played the role of Brenda in the first and second Scary Movie.

The movie had its charm but it seemed a bit underdeveloped.