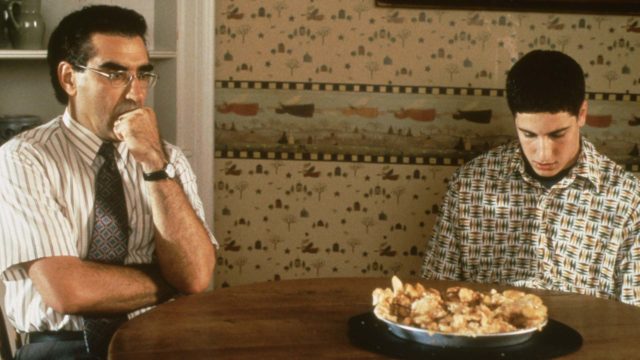 So we’ve got us another segment here on TVOvermind called “Worst movies to watch with Parents.”  This will be an exploration of films that I actually did watch with my parents that when I look back realize was a terrible terrible idea.  It’s not that the movies themselves were bad, it’s that you eventually hit a scene or two where you’re thinking to yourself, “I really wish I weren’t watching this movie with my parents right now.”

Granted I have parents that are cool with raunchiness and all that fun stuff, there are still some scenes that you don’t laugh nearly as hard with your parents as you would with your friends or even by yourself.  The first movie on the list?  American Pie.  Yes, I saw this movie with my parents.  And yes, I still think it was one of the funniest movies I’ve ever seen.  In the pantheon of films that were incredible the first time you saw them, I think American Pie might be in my top ten.

But I swear to God every 2 minutes it was just super uncomfortable having my parents in the same room with me.  Why the hell did I watch this movie with my parents?