Home
Television
You're the Worst
You’re the Worst Season 2 Episode 6 Review: “Side B*tch” 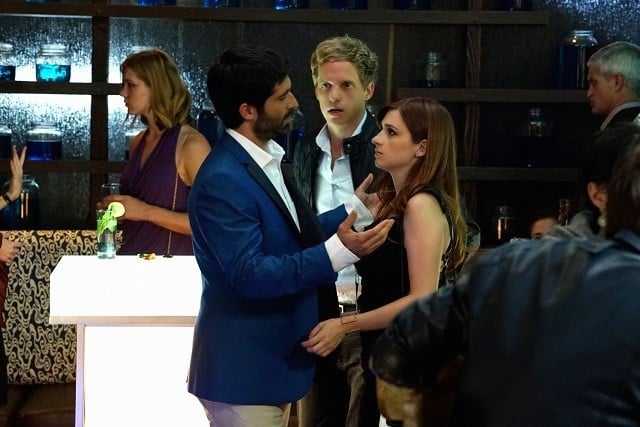 Existential dread continues to be a defining factor of You’re the Worst‘s second season in “Side B*tch.” Where Season 1 contained most of that material to Jimmy’s career, the various conflicts introduced in Season 2 have brought this internal dissonance to the rest of the cast. Edgar’s desperation to find human connection, Lindsay’s realization she never learned how to be an adult; even minor characters like Dorothy dissolve their adult lives into a depressing catchphrase, throwing themselves blindly into new paths of life in another stellar episode of FX’s comedic gem.

As its title suggests, “Side B*tch” is about solving the mystery of where Gretchen is going at night. When Lindsay jokes that Gretchen probably has a “side b*tch,” Jimmy steals the burner phone Sam made her buy, and tries to figure out where she’s been heading in the middle of the night. However, “Side B*tch” is about a lot more than re-employing Jimmy’s fake mustache for the first time this season (yay!); it really sidelines Jimmy for most of the episode to explore the professional and personal anxieties of its female entities. Written by Allison Bennett and directed by Wendey Stenzler, “Side B*tch” vacillates between a number of intriguing explorations of femininity, be it Lindsay’s attempts to find her ‘own way,’ Dorothy breaking down the very real sexual harassment women in comedy constantly face (led by the endless barrage of insecurity-driven dick jokes, of course), or even Becca, who is trying to navigate the complicated, often gross world of managing a pregnancy with her stupid but loyal husband, Vernon.

These stories run a wide gamut of emotions, placing Dorothy and Lindsay on opposite ends of the spectrum to balance the palette of the episode to explore a similar idea: the influence the men in their lives have had on their self definition. Lindsay’s story is a wonderfully balanced blend of empathetic, pathetic, and hilarious, while Dorothy’s story goes from ugly to cute to horrifying, all in the matter of a couple scenes (as does Becca’s, thanks to Vernon’s helpful, but disgusting instructional video). Without her husband, Lindsay literally feels useless, and does something to take back that power. Dorothy’s story runs along a similar vein, with the added social commentary of comedy’s disgusting frat-boy underbelly, ideas that leak themselves into everyday society.

Of course, these stories are more about the professional and personal anxieties a woman faces on a daily basis. Be it the crippling anxiety that things are getting out of hand (as we see with Gretchen, crying alone in her car at the end of the episode), or the realization they’ve wasted nearly a decade on something that’s destroyed them personally (Dorothy and Lindsay), “Side B*tch” takes a surprising detour from Jimmy and Edgar’s romantic entanglements to highlight the awesome women in its cast, offering each individual character opportunities to shine and explore their “look in the mirror” moments – even Becca’s short scene offers a taste of this, forever changing the meaning of the phrase “lube up your thumbs!”

How well “Side B*tch” handles this is impressive – even more amazing is how it does so without losing sight of its male characters among this. Jimmy hasn’t exactly been front and center this season, but his own professional anxieties are being redefined by his emotional fragility, which has come rushing to the surface since Gretchen discovered his old engagement ring for Becca in his underwear drawer. You’re the Worst is about a group of deeply flawed people stumbling their way through life and hoping for the best. While this sentiment offers the show a sense of freedom other comedies don’t, You’re the Worst doesn’t accept that without also accepting the responsibility of depicting how impossible that bohemian approach to life can be. We’re all a bunch of neurotic, self-obsessed freaks, and the quicker we can accept that, the quicker we can accept that sometimes, we just need to sit alone in a car and play a crappy game of Snake on an old cell phone. The facade of bliss in the face of infatuation can only last so long: eventually, be it after a year or a decade, our ugly truth always finds its way to the surface. Finding true love in life is about dealing with another person’s ugly truth, and as Season 2 of You’re the Worst continues, this show keeps offering more and more hope that we, even in the emotionally detached age we live in, can still find that beauty in another person. After all, if Jimmy and Gretchen can make it work, can’t we?