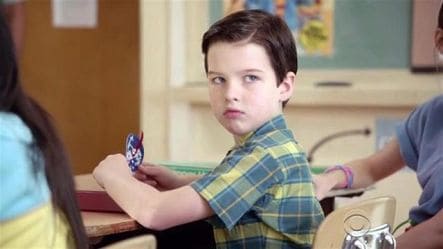 Ever wonder about the first person to underestimate Young Sheldon and live to regret it? Turns out, he worked at NASA. If there’s one thing we know makes Sheldon angrier than an unplanned bowel schedule, it’s someone telling him he can’t figure something out. In 1989, Sheldon set out to solve the problem of how to land a rocket. More to the point, he set out to crush a man from NASA who thought his questions were cute.

By now we know that Mary and George Sr. needed to raise Sheldon with a very particular firm hand. After all, Sheldon’s problem was that he stayed up late doing extra homework. This was also the child who had tried to order radioactive materials over the Internet, thereby sicking the FBI on his house. His obsession with trying to solve a scientific problem out of spite made him a little cookier than usual. Admittedly, a lot cookier, since upon being grounded from Radioshack, Sheldon gave himself an ulcer. After a trip to the doctor’s office and several sleepless nights, Sheldon finally sends his hypothesis off to NASA–and they don’t respond.

Instead of telling Sheldon to get over it, George does something extraordinary, something only an extraordinary dad would do. He drags the entire family to Houston so that Sheldon can confront the NASA guy. He even bullies his way into the room to demand the man see his son. Just like that, Sheldon has his say, and NASA is indeed impressed. What he says next is an obvious foreshadowing to the reason Sheldon and Leonard would later become friends. Although Sheldon’s theoretical calculations were spot-on, there wasn’t yet any way to implement them. At that moment, Sheldon was okay with that. He’d made his point, he’d proved the NASA guy wrong, and he’d never loved or respected his father more. I’d like to know how much respect Sheldon had for Elon Musk after he read Sheldon’s notes and didn’t give the boy credit (and yes, that was the real life billionaire Elon Musk). It would probably be the equivalent of Sheldon’s reaction the first time he came face-to-face with Wil Wheaton.

Who deserved the most praise from this episode: Sheldon or George?

Young Sheldon Season 1 Episode 6 Review: "A Patch, A Modem, and a Zantac"

Young Sheldon chose a career in theoretical physics for one very important reason-to prove he was smarter than NASA.