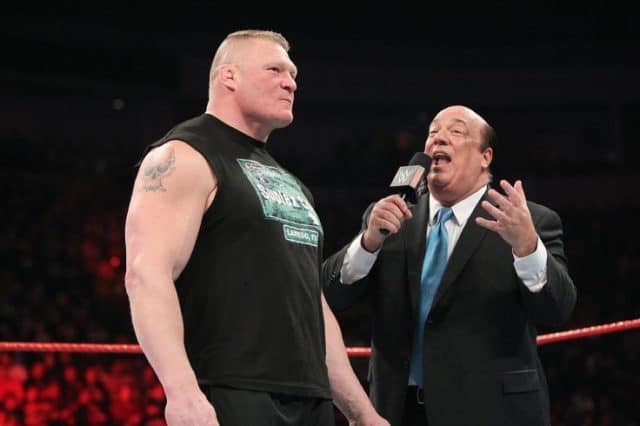 It’s extremely difficult to think of anyone more intimidating or “beastly” than Brock Lesnar.  Whether it was way back when he was Olympic style wrestling, destroying opponents in the WWE, dismantling people in the MMA Octagon, or even horsing around with the idea of trying out for the NFL, you’d be hard pressed to find a tougher individual on the planet.   In the pantheon of intimidating wrestlers of the WWE, I might have to give Lesnar a top five.  Who else would be in that top 5?  Tough call.  Andre the Giant has to be in there.  I would say The Undertaker is way up there as well.   I’m talking just really scary dudes that even other wrestlers are freaked out by.   Anyway, the latest news from Vince McMahon should be both welcoming and disheartening for WWE fans.   According to IBT

WWE has reportedly been planning for Brock Lesnar to become an “unbeatable monster” for some years now. Apparently, Vince McMahon wants to make the Beast Incarnate the dominant force in the wrestling entertainment company and then make him lose to Roman Reigns so The Big Dog wins over fans.

“I mean, the whole big thing for Brock all along has been to become a monster, be unbeatable, run through everybody and then lose to Roman Reigns. That has been the idea of Brock for years now,” Dave Meltzer said on the latest edition of Wrestling Observer Radio, while explaining why the company’s chairman McMahon could re-sign Lesnar after the wrestler’s lucrative deal with the company expires in 2018.

According to a recent report from Wrestling Observer, WWE wants Reigns to replace John Cena as the new babyface of the company with a fight against Lesnar at WrestleMania 34 pay-per-view (PPV) event, which takes place at the Mercedes-Benz Superdome in New Orleans on 8 April in 2018.

Here’s what I find ironic about this whole thing.  It’s the WWE!  Every single match is scripted.  Even the word “Entertainment” is in your title guys.  If Vince McMahon wants Brock Lesnar to be this unbeatable monster, then all he has to do is say so.   I find the whole narrative to be both perplexing and humorous.  But you know what I’m starting to realize about the WWE?  Even if the events are scripted, the wrestlers are employees and just like any employee wanting a promotion at work, you have to earn it when you become champ.  At least that’s my new theory on how this whole company works.

John Cena isn’t the champ simply because of his looks or attitude.  That’s certainly a part of it.  But it’s because he’s one hell of an employee to the WWE.  He’s earned his throne whether the fights in the ring are scripted or not.  It’s the things we don’t see behind the scenes.  My guess is that Cena has an incredible relationship with Vince McMahon and Co. and that plays into his success in the WWE in a big way.

As for the future of Brock Lesnar, I’m still scared of looking at this guy.