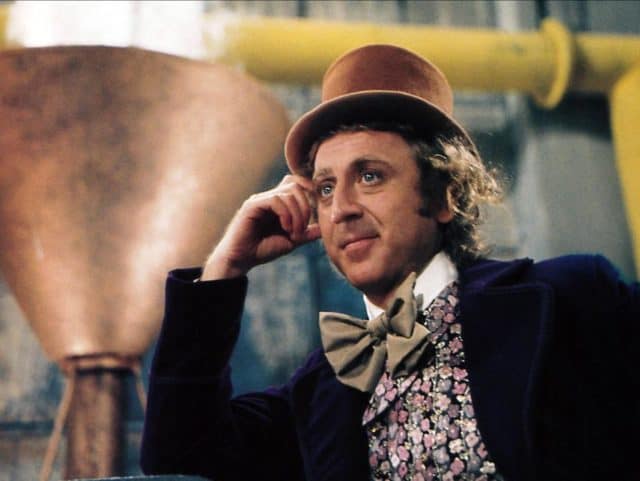 Willy Wonka and the Chocolate Factory will forever remain as one of my favorite movies and books of all-time.   Gene Wilder as Willy Wonka is easily one of the best characters ever portrayed on the big screen and anyone who tells you different hasn’t seen the movie.  While the movie is great and on the surface seems like its for kids, we all know just how insane this movie really is.  Wonka himself is a lunatic and the movie doesn’t even remotely hide this fact.

However, today I read a theory about the film that blew my mind.  If you haven’t seen the video about how Grandpa Joe is the meanest guy ever, that’s a good star.  But this theory is pretty recent and came from Reddit.  It suggests the entire Golden Ticket contest was rigged. Get ready to have your life completely changed:

OK we are led to believe that all the golden tickets have been found. The news reported from Paraguay. Gene Wilder actually plays the reporter who relays the news that the last ticket has been found so we can easily make the assumption that the reporter is actually Wonka and he intentionally fabricated the report. Why?

He wanted somebody to find the last ticket the pure way, not just as part of the contest to win the lifetime supply of chocolate. He also wanted somebody local for many reasons. It would be much more likely for a child to be able to stay and move his entire family into the factory if he/she was local. Also if the last kid was local there would be no logistics of getting him/her to the factory because the event was just a day away. Now let’s look at how Charlie gets the ticket.

Now it gets interesting

He finds money and goes into the candy store run by Bill (oddly another form of William and Willy). This theory has Bill working for Wonka. We know he likes kids and gives them free candy….lots of it..as seen in the opening Candy Man number. But you say ‘Wonka has only Oompa Loomps working for him’. Not true. Remember Slugworth? At the end Wonka even admits to Charlie “He Works For Me”. So we know he employs humans as double agents. Bill gives the kids candy and sells it as well. He reports to Wonka about everything.

Wonka instructs Bill to give the last ticket to a local kid, a poor kid, an unselfish kid. Bill probably already knows these things about Charlie but just need to confirm them. When Charlie comes in with his found money Bill offers him a Slugworth or a Wonka. Charlie says “whichever is biggest”. So he gets the Wonka. Then as Charlie is walking out he says to Bill “I also want to get one for my Grandpa Joe”…that is the clincher.

Now the mind gets torn off

Bill HAS to give the ticket today because the event is tomorrow. Charlie NEVER gets to choose what candy to buy grandpa Joe. Bill says ‘here, try a traditional Wonka bar this time’ and grabs one. He doesn’t grab one from the stack as an owner would, he takes the display one and hands it to Charlie. He knew exactly which one had the ticket. It was displayed right out front but behind the counter so it could only be retrieved by him.

Also (and this might be a bit of a stretch) when Wonka meets the kids he acts like this is the first he has heard of any of them….until he gets to Charlie and he says “I read all about you in the papers”. He didn’t say anything like this about any of the other kids. Could the “papers” he is talking about be a report from Bill?”