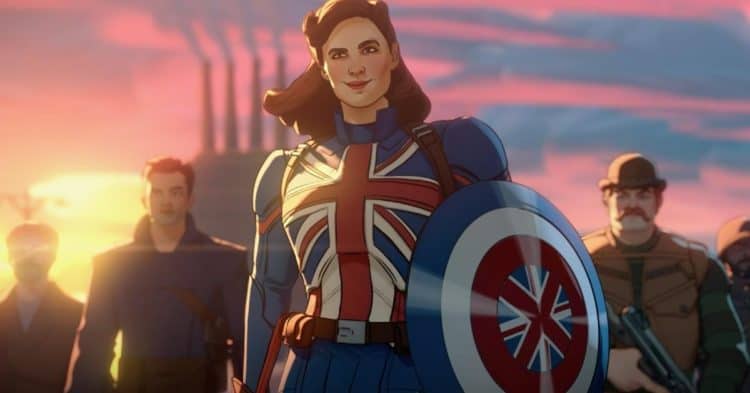 I think we should totally expect Captain Carter to pop up in Doctor Strange in the Multiverse of Madness. Just take a closer look at the poster and you’ll notice an image of her shield in one of the broken glass shards. And after the finale of the animated What If…? series, I think it’s safe to assume that at least some of those variants will make their live-action debut. What better place to have them pop up than Doctor Strange 2? Spider-Man: No Way Home was the beginning of the introduction of the multiverse and now Doctor Strange 2 will pry the doors wide open. Based on the title, I’m sure you know what to expect. To put it lightly, total chaos, total mayhem, and absolute madness for the Sorcerer Supreme. Just check out the trailer and you’ll get a taste of what we have to prepare for. First of all, I have to bring up that little voice cameo from Sir Patrick Stewart. Yes, I think we can say Professor X is officially back. Maybe it’s not the same Professor X we all remember from the Fox-produced X-Men movies, but we’ll find out when the movie comes out. Either way, it’s just so bonkers that Marvel is actually bringing back Patrick Stewart as Charles Xavier. And to think, that’s only the first unexpected character they showed just in the trailer. Who else can we expect to see in the Multiverse of Madness?

Fans everywhere are making all kinds of theories on who will pop up. It’s fun to speculate, but I think Captain Carter is on the top of the list of characters set to return. Why her? Well, Marvel is coming off fresh after their hit Disney+ shows from last year and one of them was the What If…? series. There was a lot to take in and so many crazy different variants we got to see. Opening up with Captain Carter was a good move, as it gave us a new take on Captain America. The coolest thing about it was that Steve Rogers was still active as basically her sidekick, operating an Iron Man-like suit called Hydra Stomper. The fate of Steve Rogers in the What If…? series was left ambiguous, very similar to Bucky Barnes after the First Avenger. Captain Carter made it her personal mission to find her missing lover, but her pursuit indirectly led her to meeting the other variants from other universes. Together, all these different variants became a new superhero team in the MCU known as the Guardians of the Multiverse. It was a cool finale with a new team of fresh faces, and I guarantee you that won’t be the last time we see them.

The first teaser trailer for Doctor Strange in the Multiverse of Madness showed us the first variant from the Guardians. Stephen Strange met his more deranged variant, better known as Strange Supreme. The short scene we saw of them together heavily implies that the variants from other universes will get involved in fixing Strange’s mistake. When Strange Supreme told him that things were getting out of hand, you just knew that stuff was going to go down. I still can’t even imagine what kind of madness will transpire, but I do have a strong feeling about Captain Carter making her live-action debut. Based on the rumors about the Illuminati being in Doctor Strange 2, there is a high chance Captain Carter will be a member. If there is some legitimacy to that rumor, then she’ll be a member of two superhero teams in the MCU. That’s pretty cool, but I can’t help but wonder about the future of this character in the MCU. I do think she could become a more prominent hero in future MCU projects. If that does become the case, then could she maybe replace Steve Rogers as the new Captain America. I mean, as Marvel fans, we have to acknowledge that there is only one Captain America. Sure, Sam Wilson is now technically Captain America, but it’s like one of the Robins putting on the cowl and becoming a new Batman. Just like Bruce Wayne is the definitive Batman, Steve Rogers is the definitive Captain America.

With that in mind, we know that Captain America 4 is coming and it has been reported that Chris Evans will be involved. I predict that Sam Wilson will be the dominant Captain America for the movie, but that doesn’t mean we won’t see Steve Rogers take up the shield again. I do think he’ll be Captain America for another Avengers movie, but if Captain Carter keeps popping up, how will that play out? Steve Rogers got his happy ending with Peggy in Endgame, but this Peggy did not. It would be a very interesting interaction between Steve Rogers and a Peggy Carter who became another universe’s Captain America. And with Sam Wilson involved, it could be like another Spider-Man: No Way Home scenario. Is it possible an interaction between Steve Rogers and Captain Carter could spark another romance? No matter how hard Steve tried, he just couldn’t forget about his first love.

I mean, the guy had a brief fling with Peggy’s niece after she died and then went back in time to get back with Peggy. That’s actually kind of weird, but in his defense, he was frozen for many years before he got the chance to start their relationship. If he meets a Peggy more like him, I think that would catch him off guard, but I also think he would feel some infatuation for her. Like I said, that would make for a very interesting interaction. I still very much want to see how far Captain Carter’s development will go in the MCU. If Captain Carter does appear as a member of the Illuminati in Doctor Strange 2, she will likely have more prominent roles in the future. Yes, that is a good thing. However, I wouldn’t want to see her as the new Captain America in the MCU. As of now, that is Sam Wilson, but my prediction is that more successors will follow. When that happens, Chris Evans will return to lead the team of Captain Americas. How cool does that sound?