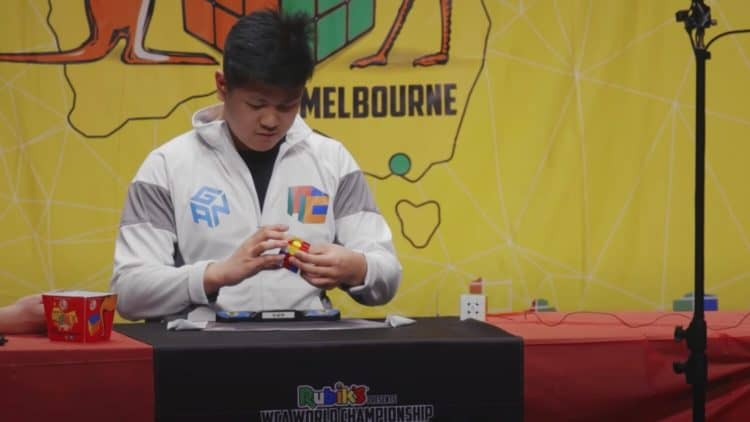 Something like this makes you feel less than average doesn’t it, especially if the ‘average’ person is supposed to be able to figure out a Rubik’s cube in such a short time? The reality of it is that those that devote this kind of time to this device aren’t always super intelligent or born geniuses, well some of them are in their own way, but they’ve memorized the algorithms and patterns necessary to take down a cube in a matter of seconds. That’s one of the great tricks that’s been revealed about any Rubik’s cube, that there are only so many movements required to unscramble the confusing morass of colors that defy any easy solution according to many people. The time it takes some folks to spin and align the colors is simply amazing and while some folks might feel a bit jealous that others can do this so quickly it’s something that I stand in awe of and recognize as a skill that not everyone has. Having been asked ‘how do you do this so easily’ in regards to something else that people find difficult, there’s more of a kinship with those that find a level of ease to something that mystifies others that makes it simpler to look at speedcubing with a great deal of respect. This is why watching The Speed Cubers documentary would be quite interesting as it would appear that the show will detail the rise of speedcubing and even the advent of the Rubik’s cube throughout the world.

Many of us have likely picked up a cube once or twice in our lives and figured out that it’s not just a matter of lining up the colors as we thought, but figuring out a puzzle that initially, a lot of people aren’t going to get right off the bat. It’s a matter of how our minds are geared and whether or not we’re able to see the pattern and how best to solve the knot of colors that are so easily randomized in so many different ways. Speedcubing actually started in the early 80s, only four years after the puzzle was introduced to the world in such a broad manner, but it has eventually grown into a popular and very competitive event where records are made and broken quite often. But thinking that people are attempting to solve a Rubik’s cube in three seconds or less is both amazing and astounding since watching their fingers almost blur over the tiles is something that a lot of people might figure is nearly impossible. Yet the folks that make this their hobby and their passion manage to do this with the kind of ease that might make a lot of people jealous simply because they can’t do it and might spend three seconds examining just one side. It’s alright if you can’t figure this thing out, not everyone’s brain works in the same way and even those that can figure them out aren’t born geniuses, they’ve simply learned the patterns and have them memorized in a way that allows them to pull whatever algorithm they need from their mind in a matter of seconds, sometimes before they even get started.

The fact that young children can do this might make some adults a bit jealous, but again, one has to remember the differences in levels of thinking, as a child’s mind is essentially a sponge and will soak up whatever information is being fed into without a much reserve or time for introspection as an adult, who will have learned to question and analyze any incoming information as a habit. Those adults that have been working with Rubik’s cubes for much of their life are creatures of habit as the documentary will no doubt show, and have refined their hobby and passion in a way that allows them to better understand the nature of the cube and just how to approach it in the best manner. Watching those in this documentary is going to be eye-opening for certain, though learning more about them, particularly two of the contestants that have been competing against one another for a while now, might be even more so since there is something different to their thinking without a doubt, as there are a great many individuals in this world that have tried and given up on the Rubik’s cube, but are still intelligent in their own ways. There’s something about this pattern, this color-filled puzzle, that some people get and others don’t, and been a point of frustration with some and dismissed by others for many years now.

It’s likely important when watching this documentary to take it with a grain of salt like so many others, and not feel as though your intelligence isn’t enough. It’s easy to feel dumb when you can’t do something, but with a Rubik’s cube there are just some people that get it and some that don’t.