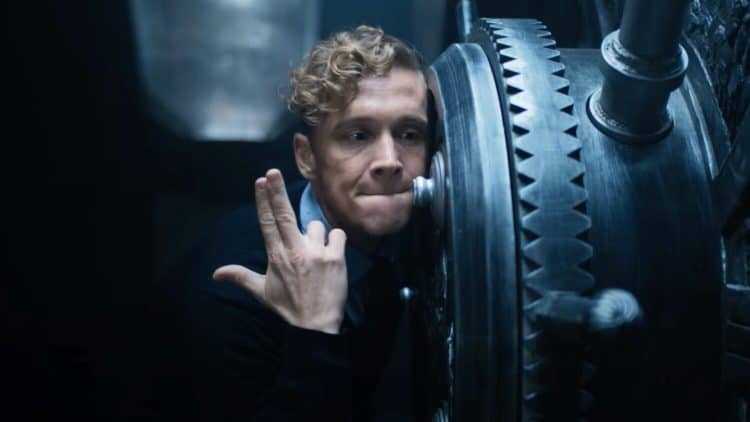 Of course there are questions, lots of questions, this is Ludwig Dieter we’re talking about, so there are bound to be hundreds of questions about anything and everything having to do with a job. It was already established that Army of the Dead wasn’t going to be a completely standalone movie, so Army of Thieves isn’t much of a surprise. But what it will do is show how Dieter made his living before making his way to America, which is, of course, as a safecracker who has a definite reputation as being one of the best if not THE best. The only thing is that, well, Deiter is, Deiter. What this means is that he’s not a combatant, he always has questions, and he’s not exactly the kind of guy one brings on a job unless there are plenty of people around to keep him safe so that he can do what he needs to do. Other than that, he’d be kind of a useless character otherwise since watching him hold a gun is just cringe-worthy. Watching him open a safe though, that’s amusing.

Army of Thieves is apparently going to be happening during the outbreak in America since Dieter is getting recruited by none other than Nathalie Emmanuel, or her character at least, Gwendoline, while the world’s attention is focused on the outbreak. This prequel will likely be setting up the character for the audience so they can better understand him and what he’s all about. Army of the Dead did roll out pretty quickly, which isn’t such a bad thing, but it made it nearly impossible to really get attached to any of the characters other than those that had the most prominence. Plus, the whole idea of the different zombies makes it feel as though Snyder had a plan to give more in increments as the story went along since the ambitious movie felt as though it was opening itself to a lot of interpretation or future movies that would keep people interested in coming back.

If this is the kind of plan that Snyder had then it’s definitely useful, but it’s also kind of a cheap way to get around any huge plot holes that people have managed to bring to mind, of which there are a few that are kind of glaring and open. But it does sound as though there will be as many stories following Army of the Dead that it’s possible that Snyder has had everything under control since he started out. There has been a lot of criticism of the movie and a lot of people who are such diehard Snyder fans that they’re hanging on everything he makes as though it’s the most ingenious thing they’ve ever seen. Let’s be fair, it’s entertaining, and it’s likely that with the way things have been going in the business it might still be worthy of an award or two, but overall it was another zombie movie, albeit one that had its own interesting twists and turns. Army of Thieves looks as though it might be just as entertaining but without the gnashing of teeth and letting of blood. Of course, given that this is related in some way to the first movie it’s always possible that something could happen.

This movie does look as though it’s going to focus primarily on Dieter though, which should be interesting enough since it could go a long way to showing what he was doing in the time before Army of the Dead and how he made his way to America. One can only guess that it’s going to be a sordid tale, or perhaps one that will offer a bit of excitement that will land Dieter right in the middle of something that he might have wanted to avoid. In any case, as spinoff movies go, this one might be interesting and it might be something that will keep people entertained until the sequel comes around since there are plans for an Army of the Dead 2 movie apparently. Where the first one was localized in Las Vegas though, it’s likely that thanks to Vandherohe getting away and finding out that he was bitten that this outbreak will be a little more widespread, especially since he’ll likely be an alpha and have his own little army, unless of course, his plane crashes.

Snyder is no doubt going to come up with something that will keep people in their seats since it’s already been seen that a lot of people did enjoy the first movie and will no doubt be looking forward to others. But since Army of Thieves might be kind of different from the original movie it’s easy to guess that it might not be as appreciated. But Army of Thieves has a big name to live up to right now, so here’s hoping that happens.