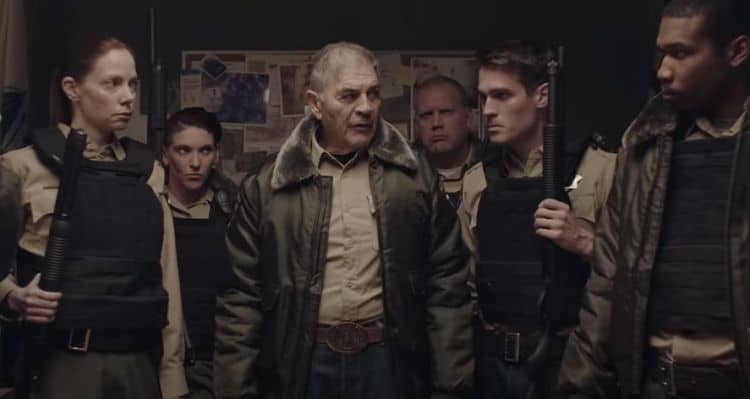 There’s always that one person that doesn’t want to believe the monster is real in a monster movie, isn’t there? It’s the kind of thing that goes along with the formula of a monster movie since there has to be that practical individual that doesn’t want to believe that there are things that exist in the dark that can’t be explained in a minute or less. In fact, it’s been this way with many monster movies throughout history since there’s always someone that just won’t believe until the monster reaches out and slaps the hell out of them, or tears them to pieces. The Wolf of Snow Hollow kind of brings back memories of The Dead Don’t Die with Bill Murray and Adam Driver, if only because people weren’t willing to believe in zombies in the movie until it was too late. But of course, a werewolf is a very different type of beast since it moves a lot quicker and will actually strike and then fade away when it’s done with a victim, whereas a zombie will continue to chomp and chew and tear a person apart until its sated…and then move on. But so far the movie looks like it could be a bit of fun as well as a useful horror movie since it will be coming to select theaters in October.

You likely noted the presence of the late Robert Forster as well, but there’s no worry about Deepfake or AI suddenly breaking the code and making a perfect replica of a deceased actor since this was Robert’s final performance before his passing, and it looks to be yet another great moment since his line about not praying due to the lawyers is definitely on point in the current era. It almost feels petty to blame the current era for a lot of things, but the truth is that there have been several changes throughout the years that make little to no sense, especially given that they’ve been affecting entertainment just as much as the real world. But back to the movie. It does feel a little more effective to include real-world problems as they’re being seen in the movies, even if applying them might take a steady hand and the realization that being judicious with such issues is important to maintain the overall feel of the story. All in all, it does make for a more realistic story despite the unreal nature of the movie.

Werewolves are interesting when it comes to telling the tale of movie monsters since the legend of such creatures has been around for a long time, and it’s a legend that’s been told in many different ways by many people. Some claim that the creatures are little more than feral humans that have gone mad, while others would claim that these are cursed humans that can change into wolves and have to live on the flesh and blood of others. Pop culture has taken that so many steps further at times that it’s become something entirely different at times and yet very recognizable at others. In fact, this particular story feels as though it’s going to be something that’s familiar, a bit of comfort food for the brain that’s taking the current time period, and giving it something that not every mind would be able to deal with. It’s easy for some to admit that if the monsters that lurked within the shadows of cinema and pop culture were to suddenly come crawling out, eyes glowing with malice and claws ready to rip and tear, they wouldn’t be able to handle it. Some might think that it’s a dream come true, even if it’s a nightmare that’s aiming straight for them. But the great thing about monster movies is that they stoke the imagination and cause a part of us to tremble as that primal fight or flight response is triggered, thereby releasing the needed adrenaline into our system that some people enjoy. This is a big part of why some people love horror movies and why this one, in particular, should be a good fit, especially since it doesn’t have such an A-list cast that can and sometimes does distract from the overall feel of the movie.

With all respect to the late Robert Forster, there are times when a monster movie really needs a cast that is effective but still isn’t considered to be such a big deal that they drown out the main point of the story. Without a doubt, that’s why some horror movies don’t work as well, since the expectations are insanely high due to the cast. This particular story looks like a return to what people might expect, however, and it already appears to be something that might work for what it is, not just who’s in it.