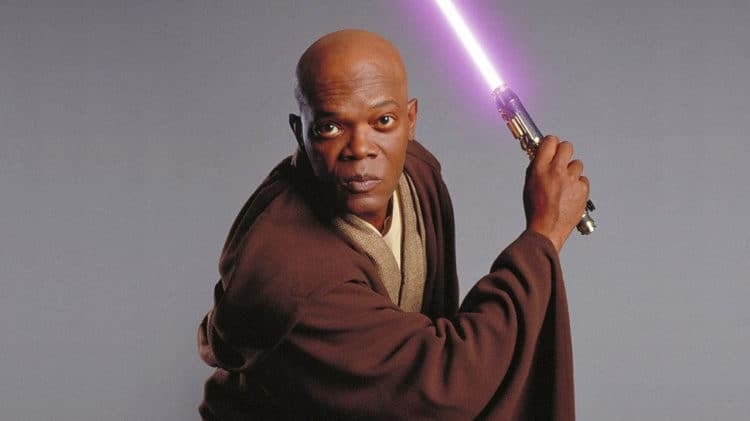 Remember when Samuel L. Jackson was in Star Wars? His purple lightsaber-wielding Jedi Master, Mace Windu, was one of the best characters from the prequels. Throughout the prequels, he was mostly a secondary character and his death felt a bit unsatisfying. So what exactly makes him such a fan favorite for Star Wars fanatics? Is it because he was played by Sam Jackson? Well, that’s not completely it, but it certainly helped. After all, he convinced George Lucas to give him a purple lightsaber simply because he thought it would make him stand out more. That sounds odd on paper, but when we saw Mace Windu ignite it on screen for the first time, a new iconic Star Wars character was born.

The character debuted in The Phantom Menace as a Jedi Master and a member of the Jedi Council. He was shown to be an influential member of the Jedi Order, taking charge and doing most of the talking. As his screen time progressed, it became clear that he wasn’t just another Jedi Master, but a right-hand man to Yoda. He may have spent a little too much time talking, but by the end of Attack of the Clones, his purple lightsaber saw the light of day. What came next was Mace Windu slicing and dicing a lot of droids, even decapitating Jango Fett. This got our attention and made us beg for more Mace Windu action ever since.

His final appearance in the Star Wars movies was Revenge of the Sith. After defeating Palpatine in a duel and nearly killing him, Anakin Skywalker betrays him. He loses his right arm, gets electrocuted, then forced out of a window by Palpatine. Even by Star Wars standards, that is one harsh death. Poor Mace Windu got it bad, but despite his apparent death, fans have been demanding that he return. But didn’t he get shocked by force lighting and forced out a tall building to his death? That would normally kill any other Star Wars character, but this is Mace Windu we’re talking about.

What the Star Wars prequels fail to explain about the character is his status in the Jedi Order. It’s far more significant than you think, because he didn’t get to where he was by making pears float. The Star Wars comics describe Mace Windu to be the champion of the Jedi Order. His lightsaber skills were above every other Jedi’s and he fiercely followed the code to the fullest. The movies show this as he’s portrayed as a strict traditionalist. When Anakin was brought before him, he claimed he could not be trained due to his age. Even when the possibility of him being the chosen one was brought up, Mace was unconvinced. To him, the Jedi Order lived by the code and had to follow it no matter what. This made him come off as extremely stern and emotionless, but he only cared for preserving the Jedi Order.

Mace is a loyal Jedi at heart and he was as much a warrior as he was a Jedi. While that does sound counterintuitive, don’t forget how he described the Jedi as peacekeepers. When the Clone Wars began, Mace expressed his distaste of being seen as soldiers for the Galactic Senate. He opposed violence and war, but that didn’t stop him from fighting when it was necessary. One of his best moments was in the old Clone Wars cartoon when he single-handedly fought an army of battle droids. Some Jedi can probably do that, but Mace did it without his lightsaber. He used his uncanny skills with the force to destroy the droids and win the battle for his clone troopers. Can Mace Windu possibly get any cooler?

Actually yes, he most certainly can. The Star Wars novels explained a unique force power that was never shown in the movies. It’s a power that Mace Windu mastered and it actually helped him defeat Palpatine in Revenge of the Sith. This rare ability was known as shatterpoint. Mace Windu himself explains how this power works in a Star Wars novel and his explanation is very well detailed. It’s too much to go into, but in short, it basically allows him to look at his opponents as if they were made of glass. Mace would use the shatterpoint ability to pinpoint an enemy’s weak spot, then he would exploit it. No other Jedi has been able to master the shatterpoint ability besides Mace Windu, not even Yoda. And you thought the purple lightsaber made him stand out.

Mace is a Jedi that is literally too cool to never see again. Fans love him and Star Wars is known for bringing back its “dead” characters. Darth Maul was cut in half by Obi-Wan, then fell down a seemingly bottomless shaft. Did that kill him? Not at all. Call it fan demand, but in the universe of Star Wars, the outlandish tends to happen a lot.

If you really think there’s no chance of Mace Windu coming back, just listen to the words of his actor and the creator of Star Wars. Samuel L. Jackson and George Lucas have played with the idea that Mace possibly could’ve survived his encounter with Palpatine. Jackson has particularly been adamant about Mace’s survival and even possibly reprising his role. He explained how Jedi can survive falling from great distances and pointed out how Mace Windu was one of the most powerful Jedi. Jackson is the type of guy who likes to joke around, but it seems he is totally serious about Mace making a return. If he’s all for it, then why not make it happen?

The only question is how exactly would Mace Windu return? I really don’t think he needs his own movie or even his own show but making an appearance as an important side character would suit him. A film that takes place sometime after the fall of the Jedi Order would be the best time period for him and his personality would have to change.This can include his views on the force, confidence in his own abilities, and disillusionment with the Jedi. His survival would be motivated completely by revenge and all he would think about is killing the man who betrayed him. You see where I’m going with this? I’m talking Mace Windu vs. Darth Vader. That is one fight I’ll bet every Star Wars fan wants to see and it’s one that can still happen.

Mace Windu had a short run with the Star Wars movies, but his story doesn’t have to end there. His “death” can change him, ruin him, or make him stronger, but I for one would love to see him return. If the upcoming Star Wars films feel like doing another standalone film, but don’t want him as the main character, it’s something they can certainly pull off.