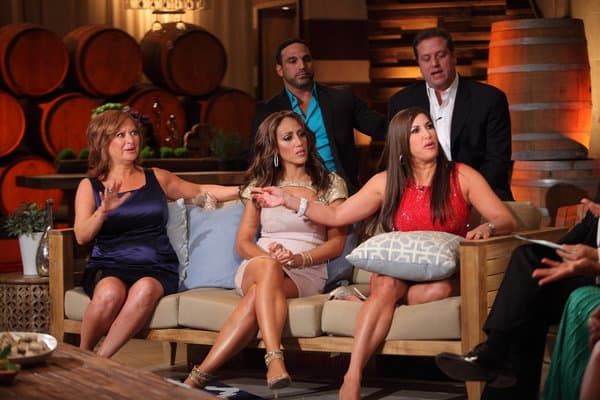 In some ways it feels as though there should be a generic article concerning why certain reality shows should just up and go away, but the amount of controversy this might cause and the fallout that could occur from such a thing also seems to be too humongous that it might not be worth the effort. That being said the Real Housewives of New Jersey still feels like it needs to reach a stopping point sometime soon if only because there have been soap operas that have aired for less time that had more in-depth content than this show and the idea that these women are being made famous for their continuing feuds and wine-induced rants is something that seems to mock other shows that are at least holding to the idea that they are for entertainment and not just drama-fueled moments of hilarity that are supposed to be serious.

Seriously, New Jersey has been taking a lot of hits from reality shows in the past several years and the blows just seem to keep coming.

The title is really misleading.

“Real” housewives? There’s no doubt that the women are real, the fact that they’re housewives are real, but leaving off the part about being from New Jersey might be wise since they’re not indicative of the average housewife in New Jersey, or anywhere for that matter. The average housewife, if there are still enough of said women around the nation to really be labeled as such, don’t tend to have the same issues that these ladies rant and rave about on a regular basis and they certainly don’t worry overmuch about the drama that suffuses these women’s lives like a continual fog of woe and misery. In fact it seems fair to say that if you asked just any woman off the street or any housewife in her home she might admit to watching the show but she might also admit that the Real Housewives are anything but.

The show has had its time in the sun.

Reality shows do have a shelf life despite the fact that many of them seem to want to ignore this in favor of attempting to run season after season of issues and therefore drive the shows into the ground like a railroad spike. The Real Housewives have been featured as a show that has for some time now been seen as something entertaining to put on, or as something to keep on in the background when one is doing housework, but many people don’t seem to take it seriously any longer and there’s a good reason. People have their own issues to deal with, and the only value that the issues of those on TV have to them is to have something to laugh at and possibly remind themselves that they don’t have it so bad after all. Plus, the idea that anything and everything on the show is real loses a bit of credibility with the fact that reality TV is highly scripted and geared to show people the kind of drama they want, not the type that actually happens in real life. It’s a concept that has had it’s time and its fun and needs to move on.

Let’s put it this way, the more dramatic a woman acts on the show, the more likely it is that they’ll see their paycheck increase. That’s right, the wilder it gets the more the ladies collect, and if you can imagine just how much they want that paycheck then you can understand the craziness that goes on during these shows. In an era during which women have been trying to gain more respect and a feeling of empowerment however the idea of kowtowing to anyone in order for a paycheck seems to work against such ideals and serves to trip women up rather than help them move forward. In many ways this show isn’t about being a strong woman as it seems to instill a need to chase the paycheck rather than band together and show some unity as women. The arguments against this idea could be many in number but very low in sincerity since if anyone’s ever watched just a few minutes of the show they’ll understand that there really isn’t that much decency t obe had in even a single episode, and now we know why.

It’s easy to see how diehard fans of the show would jump all over anyone that has anything negative to say about it, but in all honesty this show kind of needs to end and let the next batch of reality shows make their way up and then out again as the cycle continues. There’s always going to be another reality show that’s just itching to be made.