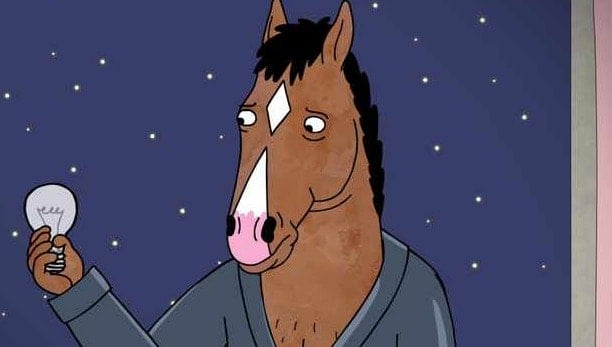 With only half a season left before it finally hangs up its spurs, Bojack Horseman is going out on a high. While creator Raphael Bob-Waksberg, aided by the fantastic animation of Lisa Hanawalt, stated that he would have liked the show to carry on a few seasons more, Netflix have sadly pulled the plug.  Perhaps this is ultimately a blessing, because now Bojack Horseman– after a middling first season – can claim to have at least five stellar seasons of television. In fact, it can now claim to be the best, most unique TV show of the 2010s.  Don’t believe our strong assumption? Read on to see why we think that Bojack Horseman is the best TV show of the last decade.

It’s Unafraid To Be Deeply Serious

Trauma, suicide, drug addiction, gun violence, sexual assault and depression. You name the grim topic, Bojack Horseman has probably tackled it. To fold these themes inside of an animated TV show about a talking Hollywood horse is harder than it seems, and Bojack Horseman, despite its constant quips and overall sarky attitude, finds a way to make these tonal shifts work. It may be ostensible a comedy, but Bojack’s greatest strength is its willingness to go darker than most shows even dare.

With both a finger on the zeitgeist – “Hank After Dark” a direct commentary upon the sexual abuse administered by Bill Cosby – and the universal, such as the show’s constant exploration of Bojack’s emptiness, Bojack Horseman pointed a new way forward for the half-hour comedy format, also expressed in shows such as Atlanta, Girls and Transparent. Serious topics need not be the province of the hour-long drama, but could be explored in shorter formats too, often to much punchier effect.

It Turns Sitcom Tropes on their Head

A sitcom about a former sitcom star, Bojack Horseman uses the tropes of the genre to comment on change itself. Sitcoms aren’t really supposed to be that psychologically rigorous, each episode starting with a disruption of the norm before things go back to the way they were in the beginning. Bojack uses this to comment on the difficulty of change. The show plays around with the sitcom format, introducing high concepts before pulling us back to earth with a shattering conclusion. A classic example of this is the episode “The Shot” which sees the gang break into the Nixon Library to get an important shot for Bojack’s film. It has a very high tempo throughout, yet ends on a downbeat note with his colleague abruptly getting fired. Things go back to normal, but not in a good way!

Additionally, sitcoms rest upon strong supporting characters, but classic examples rarely change who they are. Bojack Horseman is a little different. Supporting players such as Diane, Princess Carolyn, Todd and Mr Peanutbutter have almost as much psychological progression as Bojack while their essential nature (Diane’s cynicism, Princess Carolyn’s busyness, Todd’s zaniness and Mr Peanutbutter’s positivity) has not been fundamentally compromised.

The Animation Is a Joy To Behold

The world of Bojack Horseman is chock-a-block with brilliant details. Whether its specific anthropomorphic animal behavior, inside Hollywood jokes or the expertly rendered dream sequences; Bojack Horseman’s visual splendor enhances both its comedy and its harsher moments.

Lisa Hanawalt’s genius comes out of every screenshot. You can freeze the frame almost any time and see countless gags – both visual and textual – playing out in the background, making it the perfect show to rewatch. The show’s animation frees it to explore strange and unique places, whether its a film festival under the ocean, an underground kingdom, a surreal game show or the war-torn country of Cordovia.  As the show has progressed, this world has only expanded; creating a unique exploration of what it might be like if men and animals lived together in the same universe. Crucially, the show never explains why the world is like this; it only lets it be, letting us marvel at its splendors in the process.

It Deepens The Concept of the White Male Antihero

Technically Bojack is a horse, so he’s not really a white male. Yet considering his privilege and actions, he can easily be read as one. This follows a key tradition in the Golden Age of Television that began with The Sopranos in 1999: following the actions of a morally grey white male who, albeit sympathetic, is fundamentally not a good person.

What Bojack does is much different though, actively interrogating what it means when we prioritize the stories of these people. The last season especially focuses on the women and people of colour that he has hurt, showing that, even if he feels himself that he has reformed, actions have consequences and they shouldn’t be ignored. This goes beyond the usual “sympathy for the bad guy” tropes seen in The Sopranos and Breaking Bad into something much deeper; asking pertinent questions about what it means to really try and change as a person while honestly admitting that this cannot undo any of the harm rendered. Even more pertinently it interrogates the privilege – both economic and racial – he has when it comes to changing, showing how much easier white men can forgiven as opposed to women and people of color.

It Has The Best Concept Episodes Around

From “Fish out Of Water” a near-silent underwater episode, to “Stupid Piece of Sh*t”, which featured an almost constant inner-monologue showcasing Bojack’s depression, Bojack Horseman is masterful in the way it uses concept episodes to deepen the themes of the show. While sometimes concept or bottle episodes can be a bit over-labored – Breaking Bad’s “The Fly” comes to mind – Bojack Horseman finds a way to properly integrate them into the story, always landing on a devastating ending.

Simplicity strikes the hardest, with the best, most harrowing episode of the show, “Free Churro” also its starkest: Bojack delivering a eulogy for his dead mother. With only a brief flashback at the start, the majority of the episode is simply Bojack letting rip about his difficult relationship towards her. It’s a difficult and painful watch. It’s also the best writing committed to television of the decade.