Home
Movies
Why Armageddon Is Bruce Willis’s Most Underrated Movie 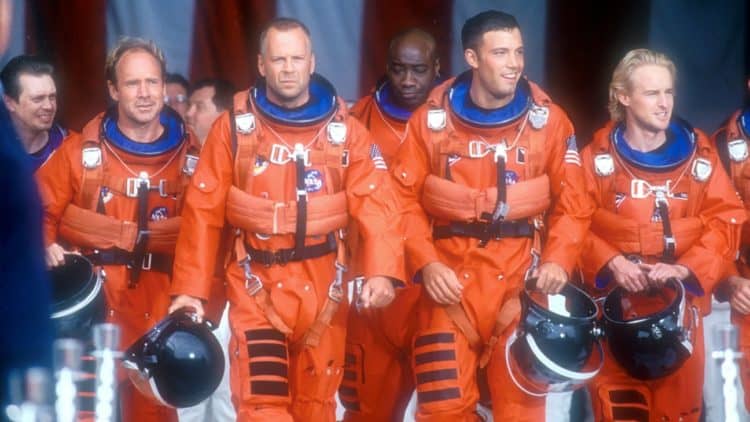 When you think about the best Michael Bay movie, you might say The Rock. In my opinion, however, I think Armageddon ranks at the top spot. I should also point out that it also stars Bruce Willis as the lead role, where he plays oil driller Harry Stamper. If you haven’t seen this movie, then you should put your biased opinion of Michael Bay aside for one day and check it out. I know the cool thing is to slam Michael Bay for his rather bombastic approach to making his movies (like Transformers), but he has made some underrated gems. Many Michael Bay fans, including me, would point out The Rock, and they’re right. However, I would argue that Armageddon is one of his best movies. And on top of that, it is Bruce Willis’ most underrated movie.

So I can’t not talk about Armageddon after Bruce Willis has announced his retirement from acting. As a longtime Bruce Willis fan, this is some heartbreaking news, especially after his family revealed that he has been diagnosed with aphasia. Although there is no cure for this condition, he can be treated. We fans wish him and his family all the best and there’s always a chance we’ll be seeing him in a movie again. If not, then we should appreciate the long and astonishing career he has made for himself for several decades.

Of course, when fans think about his career, they tend to think about Die Hard. John McClane is by far his most signature role and we’ll always remember him for that character. However, one Bruce Willis character that isn’t talked about enough is Harry Stamper from Armageddon. Now for those who are fans of this underrated science fiction flick, you’ll know it didn’t receive the best reception. Not totally unexpected, given that it’s a Michael Bay movie, but it did become the highest-grossing movie of 1998. As you may expect, astronomers like to nitpick at the scientific inaccuracies, but who honestly cares? It’s a science fiction disaster movie that is super entertaining and actually has a lot of heart. And that’s actually where Bruce Willis’ Harry Stamper comes in.

Just a little recap, but the character of Harry Stamper was tasked with leading a team of oil drillers to outer space with the mission of drilling into a large meteor. Once they drilled a hole deep enough, they had to lower down a nuclear bomb in the very heart of the meteor and detonate it. The explosion would literally tear the meteor in half and send both halves hurling past Earth. Okay, so just throwing it out there, the idea of sending oil drillers into outer space and walk around on a meteor sounds absurd.

Even Ben Affleck asked Michael Bay about the logic behind that idea and pointed out on how it would be easier to train astronauts how to drill, to which Bay replied by simply rebuffing him with anger. Not surprising in the least, if you know his reputation. But that’s okay, because Armageddon wasn’t fun because of logic. In fact, a lot of the fun took place way before the team shipped off to the meteor. Watching them undergo their astronaut training was by far the funnest parts of the movie. And honestly, it didn’t stop there. The funniest part of it all was the fact that none of them actually past their training. And with the likes of Michael Clarke Duncan, Owen Wilson, and the legendary Steve Buscemi working together just made for the best training montage.

But of course, just like any other team, it was all incomplete without Harry Stamper being played by Bruce Willis. The character acts in a way very similar to that of Bruce Willis’ signature character, the facetious, but heroic John McClane. He’s quick to make wisecracking jokes, but he’s even quicker to do the right thing when others are too afraid to do so. Even to his team, he’s more than a leader. He’s their mentor, their friend, and is the first to lead them into the most dangerous places. By definition, he’s everything a leader should be.

This is where the heart of Armageddon really shows. When you see this ragtag team of oil drillers do literally everything together, they’re basically a family. When they’re training, they’re having fun and when things go south, they have each other’s backs. And when the team is at it’s lowest, Harry Stamper is there to pull them back together. In other words, my argument is that Armageddon is a movie about family. Granted, this family goes through a lot of unimaginable chaos, but their teamwork and dedication to working together is what enables them. Can’t have a more loyal family than that, can you?

And there is something about Armageddon that separates Bruce Willis’ acting from that of Die Hard. John McClane is a father, but we didn’t get to see too many scenes of him acting very fatherly. He did save his daughter in the fourth one, which mended their relationship, and he did get to work with his son in the fifth movie, but we’d rather forget about that. There wasn’t a lot of John McClane being the loving dad who really bonded with his children because he spent more time shooting bad guys. That’s okay, because that’s what we all love about the Die Hard movies.

But when it comes to the ending of Armageddon, there’s a very surprising moment where Bruce Willis really shows his serious side. In his final moments of sacrificing himself to save the planet, Harry Stamper gives a tearful goodbye to his daughter Grace, played by Liv Tyler. This is probably one of Bruce Willis’ most underrated moments as an actor. When he sheds a tear, you just can’t help but shed one yourself. As Harry Stamper, he really shines on that loving dad moment we didn’t get to see enough of when he played John McClane. And by the end, we hear Aerosmith come on for the fifth time. A bit overcooked, but it did fit for the tone.