Home
Television
10 Things You Didn’t Know about “What’s It Worth?” 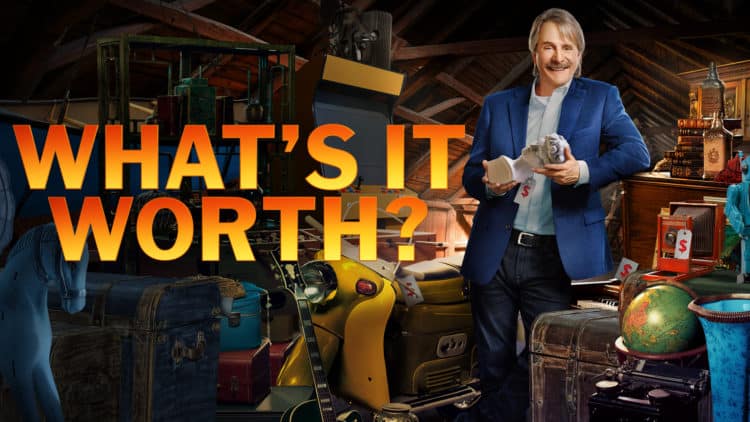 We’ve all heard the saying ‘one man’s trash is another man’s treasure,” but is it really true? A&E’s new series, What’s It Worth? sets out to answer that question. Hosted by Jeff Foxworthy, the show visits people across the country to find out how much some of their trinkets and heirlooms are worth. Some people have been hanging on to these items because they’ve always been told how valuable they are. In some cases, these items are worth more than anyone could have ever imagined, and in others they’re simply not worth anything at all. Either way, viewers will be taken on an interesting journey that may even inspire them to look into their own ‘junk’. Continue reading for 10 things you didn’t know about What’s It Worth?

1. There Will Be A Wide Variety Of Items

One of the best things about What’s It Worth? is that viewers will get to see appraisals on lots of different items. The show doesn’t just focus on people who own or collect certain types of items. No matter what kind of collecting you’re into, there’s a good chance you’ll see something like it on the show.

What’s It Worth? isn’t necessarily a comedy, however, since Jeff Foxworthy is the host, you can bet that there will be lots of funny moments. After all, we all could use a little extra humor during these times so it’ll be nice to enjoy something that is entertaining and humorous.

3. Jeff Foxworthy Works With A Team Of Experts

Even though Jeff Foxworthy is the host, he won’t be on this journey alone. He will be working with a team of expert appraisers to determine how much each item is worth. The team consists of Gina Theesfield who owns an auction company and collectors/appraisers, Christie Hatman and Chris Childers.

4. The Show Is Self Shot

COVID-19 still has production across the entertainment industry at a complete stand still. In order to produce new content, networks have had to get a little creative. As a result, What’s It Worth? is entirely self shot. Foxworthy and the rest of the team will be able to visit people from all over the country without ever leaving the house.

5. Jeff Foxworthy Is Also A Collector

Some people may feel like Jeff Foxworthy is a random choice to host a show like What’s It Worth? However, he has more of a connection to the show than many people realize. Foxworthy is actually a collector himself and has been buying all sorts of items for many years.

6. Not All Cast Members Are Collectors

If you’re a fan of What’s It Worth? A&E has made it very easy for you to keep up with the latest clips and updates. The show has an official Instagram page where information pertaining the show is posted. Not only can you see clips of the show, but you can also get the chance to learn more about the experts.

8. Viewers Will Learn About The Auction Process

Have you ever wondered how appraisers are able to determine how much something is worth? Watching What’s It Worth? will give you an inside scoop to the world of auctioning rare and antique items. You might even feel inspired to have some of the items in your house appraised.

9. The Show Is Produced By Think Factory Media

Although What’s It Worth airs on A&E, the network isn’t the only company responsible for making the show possible. The series is produced by Think Factory Media. The company is responsible for producing several other shows including Marriage Boot Camp, Million Dollar Matchmaker, and Mama June: From Not to Hot.

10. The Show Focuses On More Than Just The Items

The focal point of the show will be the items and discovering how much they’re worth, but that won’t be the only thing viewers get to see. During a Q&A, Jeff Foxworthy explained that the show will also give us some insight into the cast member’s lives. Additionally, since the show is self shot, it will give viewers a more intimate feel than a typical reality show.