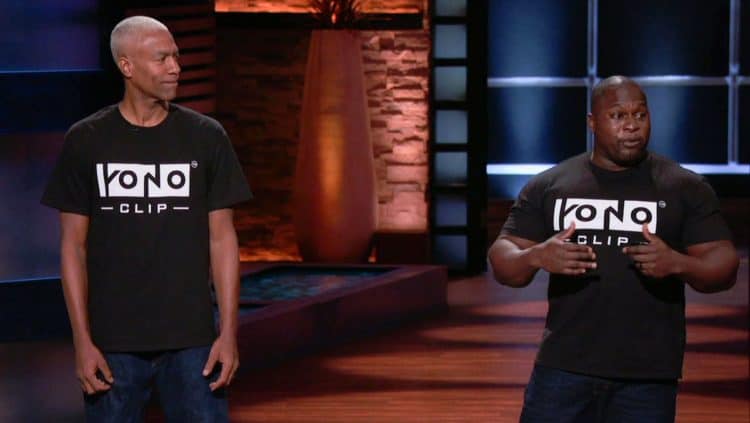 For more than a decade, Shark Tank has given entrepreneurs from all over the United States the chance to take their business to the next level. Every time someone enters the Tank, they have the opportunity to earn an investment from a very wealthy and well-connected Shark. During season 12, Atlanta-based entrepreneurs Bob Mackey and Michael Green were ready to take full advantage of that moment. They came to the show in hopes of securing an investment for their product, the Yono Clip. The product was designed to provide a simple and convenient way for people to avoid having to put their bags and other items on the floor. This concept was especially appealing during the COVID-19 pandemic as the virus has made people much more mindful of trying to avoid germs. Essentially, the Yono Clip is a device that can be attached to almost any surface and pulled out into a small hook that people can hang things on. It uses a suction cup to attach vertically, horizontally, or diagonally to all kinds of surfaces. Like most other things that appear on Shark Tank, the Yono Clip got a lot of attention immediately following the show, but many people have wondered what’s been going on since the episode. Continue reading to find out what happened to Yono Clip after Shark Tank.

Anyone who knows anything about Shark Tank knows that, in some ways, the pitch is more important than the product itself. We’ve seen lots of awesome products not get deals because entrepreneurs simply didn’t have all of their information together. On the flip side, several questionable products have been successful thanks to very persuasive pitches. Luckily for Yono Clip, it was a great product with a great pitch. Bob and Michael made sure that they found the perfect balance between humor and professionalism as they asked for $150,000 in exchange for 15% of their company. They had the Sharks’ attention from the moment they started talking. However, once the conversation got to the numbers, it was clear that Yono Clip hadn’t made nearly as much money as the Sharks like to see. They’d sold just over $14,000 worth of merchandise, and that simply wasn’t going to cut it for almost all of the Sharks. On top of that, the company was so new that Bob and Michael were still making products in their garage. One by one, the Sharks began dropping out. However, Daymond John chimed in to save the day with an offer of $150,000 for 30% of the company. To everyone’s surprise, Bob and Michael countered asking if he’d be willing to go down to 20%. The other Sharks quickly chimed in to let them know they were putting themselves in a position to miss out on a good deal. They ultimately accepted the offer.

What’s Been Going On With Yono Clip

Getting a deal is truly a life-changing experience for anyone who goes on Shark Tank. With the money and support from the Shark(s), we’ve seen several businesses quickly start bringing in millions of dollars in sales. Unfortunately, however, it’s unclear how Yono Clip has been doing since going in the Tank. The business’ Instagram profile has less than 2,000 followers and hasn’t had any activity since July. The business’ other social media profiles also appear to be inactive as well. On top of that, the product doesn’t seem to be available for sale anywhere other than the company website. Yono Clip’s website also has a note letting customers know that there is a 30 day (or longer) delay on orders. In a world where people have gotten used to instant gratification, having to wait 30 days for something you ordered online is definitely a turn-off to most people. Especially when the product isn’t something that is a necessity. The fact that Yono Clip is having production delays suggests that they didn’t actually make use of the investment money they received from Daymond in order to help with their production. We weren’t able to find any direct information on how much money the product has made since the show or if Michael and Bob have any plans to ramp things up in the future. It appears they haven’t done any press since the months immediately following their episode. One thing is for sure, though, Yono Clip certainly isn’t as popular as many of the other products we’ve seen on the show. Hopefully, however, Yono Clip is just in a rebuilding stage at the moment and we’ll see and hear more from the company in the future.