Home
Movies
Whatever Happened to the Ladies of “Coyote Ugly?” 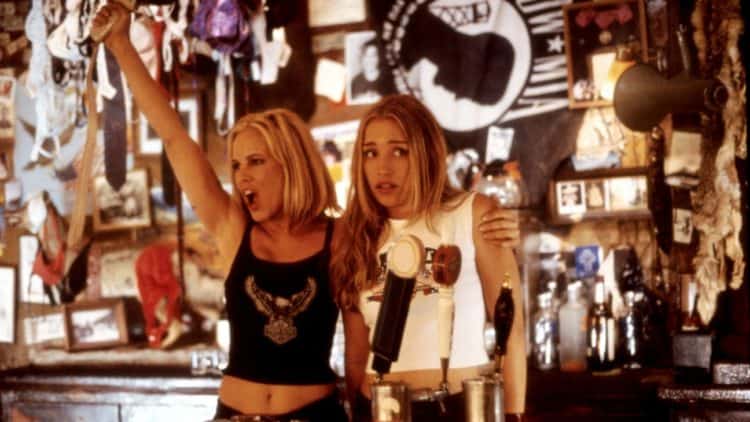 Back in 2000 a film was made that was labeled as sexist by writers such as Lucy Huber of 22 Words, even misogynistic, and just silly without a lick of common sense to its name. She has the right to her opinion and all that but if you were old enough to sit there and enjoy Coyote Ugly however you weren’t likely worrying too much about sexism and you definitely weren’t practicing misogyny in any way, shape, or form since the female actors that made the movie what it was synced up perfectly with the male actors and the whole thing came together in a way that made more sense than some salty critic was able to see. Sure it was a bit over the top, but it was a fun movie that helped show a group of strong women and the development of one of them in particular as she had to learn how to be strong and independent. Did anyone happen to get that message? Not really it would seem since the whole idea of women being scantily clad and still being inordinately strong-willed and fiercely independent wasn’t being pushed at that time. Weird isn’t it? Here’s the article that Lucy wrote just so you can get a better idea of what she thought. Anyway, here’s a different look at what’s happened to the cast since then.

Tyra was kind of there and gone within the movie, proving to be useful for a short time in the beginning and then coming back as a means of closing the movie out. But her career wasn’t bound by this movie any more than the other female cast members since she’s been seen as one of the most popular and successful models in the world. Her career has reached heights that go far beyond this movie but it was fun to see her at the time and to actually associate her with the whole idea. Plus, did anyone happen to realize that Zoe was another great example of a strong woman since she was headed off to college and had used the bar as a means to get there? Oh yes, it’s true.

Rachel was the muscle behind the bar even as Lou was the muscle within the bar proper since she was the toughest one of the bunch next to Lil. She was one of the lifers it would have seemed in the bar, a woman that was there to give the newbies a hard time and make them earn their stripes so to speak. But she was also the enforcer since she didn’t take any garbage from anyone. But after this movie she went on to have a lot of roles that were a lot less rough than Rachel and yet were still strong and independent in their own right. She’s had a lot of success in her career at this time and has come a long way since 2000.

Cammie was obviously the flirt, the tease, and the most free-spirited of the women behind the bar since she actually admitted to it. But she was also just as strong-willed as the rest and was actually a lot of fun to watch. While you might not have noticed her, unless you’ve been following her career, she’s been quite busy since the movie and has had a successful career to this point. The “Russian tease” has definitely gone on to be a popular face in the movie and TV industries.

Mario Bello is one of the many women that has been just about everywhere since she has been a popular name and face for many a year now. It doesn’t matter if her role is to be meek and mild or strong and independent she nails it with a level of skill that’s just amazing. Throughout her career thus far she’s come a long ways when describing how she’s been seen on screen and what she’s accomplished. One favorite to be honest was her part in Secret Window. It was tragic but it was so well done that you can’t help but admire the woman.

Gloria was the best friend in this movie and she was likely the balancing point between Violet and the life she was trying to live, that one friend you have that never gives up on you and is there no matter what, even on her wedding night. But outside the movie Melanie has been around a few times and has been seen in TV and movies in a very interesting capacity, especially when it came to Two and a Half Men.

Piper played the part of the small-town girl moving to the big city perfectly since you could easily believe that she was lost and alone until she finally got the hang of it. But after the movie she went on to do even more in movies and TV that have marked her as a very strong and independent person that has a very strong sense of self.

But hey, the movie was sexist and silly. If you’re looking at it from the viewpoint of a critic such as James Berardinelli from ReelViews you might think this is true, but otherwise, it’s a lot of fun and definitely a movie that was not meant to be taken seriously. Get a good laugh off of that one, I did.