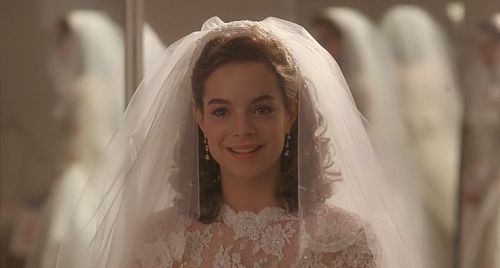 A lot of the time when you read the title ‘whatever happened to so and so’ it tends to describe someone you might not have seen for years and years or have just missed because they haven’t done a lot that’s been widely broadcast as of late. But Kimberly Williams, or Kimberly Williams-Paisley if we’re to be honest, since she is married to country star Brad Paisley, has been holding pretty steady with her career and has also been seen to expand from the screen to TV and to stage and has even written a book during her time in the business. So really, she’s kept herself plenty busy and no doubt has been on the go for a while with two kids and a husband who has his own career going as well. It’s easy to wonder how anyone would keep up with everything but for all intents and purposes it does sound as though she and her family are doing just fine at the moment and that things are just the way they need to be. If people are going to remember her for anything at this point though it’s likely going to be for her role in Father of the Bride 1 and 2 since the first movie was where she had her most success to start with and it’s been one of the most favored movies with her in it for a long time. There may or may not be a lot of fathers that have seen this movie and wonder just how they’ll react when their little girl grows up and decides it’s time to get married, but the comedy and the drama in the movie was more than enough to rope a lot of people in whether they’ll admit it or not.

She did step away from school just long enough to star in Father of the Bride but thankfully ended up going back to finish, and it does feel as though from that time on that she was hooked since she’s even alluded to enjoy her celebrity status as it gives her a chance to reach out to others and help in any way she can. Like many other celebrities Kimberly and Brad have opted to help those in need and have opened a free grocery store to help the people in their community that aren’t just in need of goods, but want to preserve their dignity as well. Angela Stefano of The Boot has more on this topic. More and more it’s becoming obvious that celebrities aren’t shutting themselves into their mansions and delivering nothing but good wishes and amusing PSA’s, but are coming out and doing their part to help those in the community that can’t weather the loss of their jobs quite so easily. The act of giving people a chance to retain their dignity, especially in front of their kids, is a big up to many celebrities as it shows a great deal of appreciation towards fans and, quite simply, a desire to help their fellow human beings when times are rough. Oh yes, there will still be plenty of criticism for celebs that won’t shut up but also won’t put up, but for those that are out there doing what they can to help there’s a hearty thank you and a hope that like everyone else that they too can get back to work eventually.

As far as what’s happened to Kimberly, her career is still going strong and despite being a little more low-key than it was years ago she’s still a fairly well-known name and has been prominent on TV and in a few other projects throughout the years that have been fairly popular but perhaps not quite as groundbreaking as Father of the Bride. Let’s be fair here, the first movie was something that pulled at the heartstrings in a big way and reminded a lot of fathers that one day their little girl is going to grow up and go out into the world on her own, and that’s bound to choke up even the most stoic dad in the world. But as far as Kimberly goes she’s been chugging along with her career and doing her best to juggle being a mom, a wife, and an actress, as well as an author and a person that wants to use her celebrity status to help others as much as she can. Like always it’s easy to criticize those that reach such heights because they have so much, but it’s just as easy to appreciate them when they keep their eye on the people that are in need rather than the people that are looking to be impressed. In other words, like several celebrities, Kimberly is proving that the caring person you see on screen isn’t just an act, it’s who she really is.