Home
Entertainment
Don’t Throw Out Those Old Disney VHS Tapes: They May be Worth Something 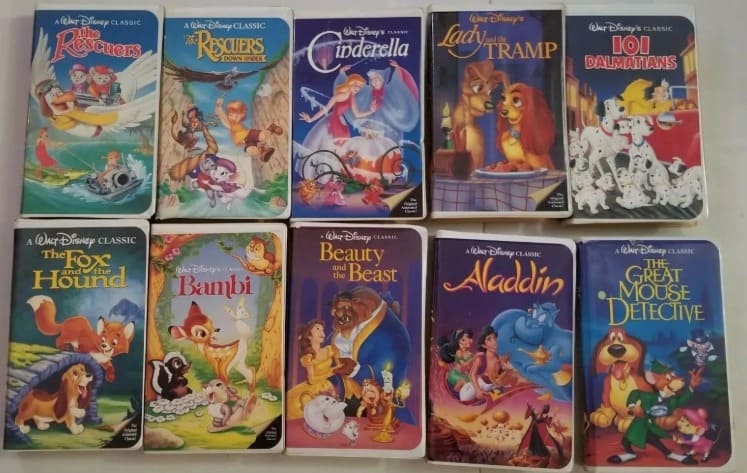 Old, as they say, is gold, but that is not usually the case for everything that has seen its better days. Land is one asset that will never depreciate and maybe that is the reason it never goes out of demand; even if you buy it today, tomorrow you will sell at a profit. Unfortunately, some things become obsolete as time passes and you have to end up burning them or throwing them out in the garbage. Those who fall under the Generation Z category may not understand that our movies did not come in discs and neither could you download them from your mobile phone and store them in a memory card. Millennials appreciate VHS tapes because it was the only way they could get to enjoy a movie. Since technology has brought with it lots of changes, your VHS tapes are probably stored in a box somewhere in the garage collecting dust to serve as a reminder of your childhood, while your flat screen television affords you the luxury of streaming content. If you are among those who are decluttering and want to throw away their tapes thinking they are no longer valuable, hold on to them just a little while longer. Although not all VHS tapes are worth keeping, your Disney VHS tapes collection could be a gold mine.

What to look out for on your Disney VHS tapes

Before you go rushing to post your tapes on eBay hoping to make some quick cash there are a few things you should know about the kind of VHS tapes on which buyers are willing to spend their money. The first thing you should note is that the ridiculous prices being mentioned on eBay are for the Black Diamond collection released between 1984 and 1993 by Disney. The Black Diamond Collection has 18 movies that include “Cinderella,” “Bambi,” “Sleeping Beauty,” “The Little Mermaid,” “Beauty and the Beast” and many more. While they seem like they can be a rare collection given that Walt Disney has the habit of releasing movies for only a short while before locking them up, by June 2017, there were over 12,000 active listings on eBay according to Small Business. You would think everyone would be rushing to buy them, but according to the article, only 16% of the tapes were sold.

Spotting a film belonging to the Black Diamond collection is easy; they have the “Classics” logo on the upper part of the spine and surrounding the logo is a black diamond symbol. Further, you should pay special attention to “The Little Mermaid” because unless you have the original tape, chances of making a killing on eBay are going to be small.

In the original VHS tape of “The Little Mermaid” the golden castle had tall cylindrical spires and while nothing is wrong with that a closer look will have you wondering what happened to the meaning of G-rated movies. One of the spires on the golden castle is paying tribute to the male genital area with an undisputable golden penis. This cover art remained in circulation for a year before Disney decided to change it and while the offensive art is something we all would avoid for the sake of our children, you should go looking for the movie with this particular banned art because it is worth more than the ones that replaced it.

How much should you expect?

The thing about the market, even online, is that unless a buyer is willing to pay the asking price, then the seller will always have to review the price tag. That said on eBay, the Black Diamond collection is rumored to be going for £14,000 although Pedestrian has reported it to have a price tag of £25,476. What if you have only a few of the original Disney VHS tapes? Not to worry because even having just one is enough to make you a small fortune; an original “Beauty and The Beast” is going for £7,000 while “The Little Mermaid,” the one with the banned cover art, is worth at least £7,500.

The weird thing is that the prices of these Disney VHS tapes were not always worth mentioning until one article began the hype around them, causing the prices to hike. Maybe the writer had a collection that he was looking to get rid of but not without getting something big in return but whatever the reason of the hype, it has remained, and it seems not just to have caught on, but will stick around for a while. It is hard to believe that before that craze began “The Little Mermaid” was going for only $100, and now it is gone up by more than a hundred times. Others like “Peter Pan,” “Alice in Wonderland,” “Jungle Book” and “Robin Hood” were being sold for less than $50.

Will you get the thousands of dollars for your tapes?

Asking for something and getting it are two very different scenarios which usually do not play out as we would them to but dreams are valid. Put yourself in the shoes of the buyer and ask yourself if you would be willing to part with your hard-earned cash in exchange for several movies, which we dare say you can watch on YouTube or other formats. It does not matter to most viewers how they watch a movie; all they care about is entertainment. That said, posting on eBay that your collection is worth thousands of dollars and expecting lots of buyers to be interested is nothing but a dream. All the same, there could be that one fanatic viewer who is into the classics and will do anything to lay his hands on that Black Diamond collection so start dusting away; you never know what luck and dollars await you.

Will the Disney VHS Tapes be worth thousands forever?

We are not psychic, but a little study of the market will tell you that nothing lasts forever. Just like the hype around the movies started and the prices shot up, all it takes is another rumor about them not being so valuable, and they will go back to the realistic prices we would not mind paying for in exchange for our own classics.