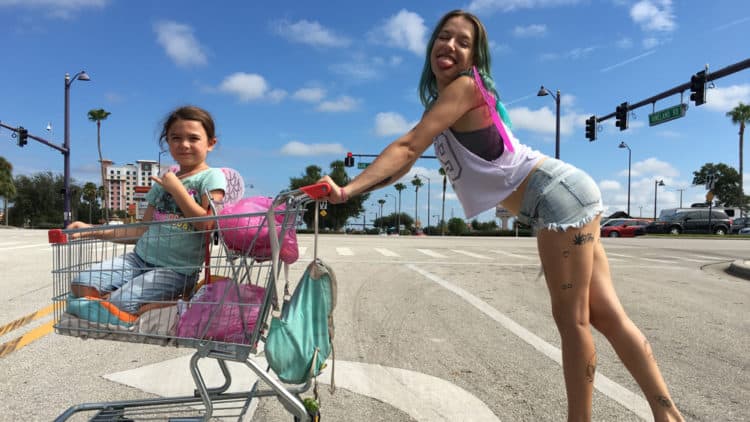 In 2017, Bria Vinaite took the world by storm when she was cast as a star in the movie The Florida Project. The film marked her on-screen debut and it quickly thrust her into the spotlight. Despite not having much acting experience, she quickly showed that she has what it takes to light up the big screen. Although The Florida Project wasn’t a huge mainstream success, it earned high praise from critics as well as several award nominations. After the film, many people expected that Bria would move on to other awesome opportunities, but the reality is that she has somewhat disappeared from the spotlight. Keep reading to find out whatever happened to Bria Vinaite.

Bria was born in Lithuania, but she relocated to the United States with her family when she was in elementary school. They settled in New York City which is where Bria spent the rest of her childhood and teenage years. Eventually, she decided to move to Miami so that she could pursue her dream of starting a clothing line. Despite always being a creative person, Bria didn’t exactly plan on becoming a movie star. In fact, acting wasn’t even on her radar. Little did she know, however, her Instagram presence would lead to her being discovered by Sean Baker, the director of The Florida Project.

As you can probably imagine, getting an acting opportunity out of nowhere was a big change for Bria, but she was up for the task. In order to prepare for the role, she underwent acting classes that were designed to not only help her sharpen her skills but also to help her bond with the rest of the cast. The filming process proved to be a great experience for Bria and she realized that acting was something she really enjoyed. Her role in the film earned her several award nominations including a Chicago Film Critics Association Award for Most Promising Performer and a San Diego Film Critics Society Award for Best Supporting Actress. Unfortunately, however, she didn’t win any awards.

The success of the movie began opening new doors for Bria and in 2018, she made an appearance in the video for Drake’s hit single “Nice For What“. The video now has more than 389 million views on YouTube. In 2019, Bria got another great opportunity when she appeared in three episodes of the TV series The OA. She also made a handful of other on-screen appearances in 2019. Her most recent on-screen role was in the 2020 music video for G-Eazy’s song “Hate the Way“.

Breaking into the entertainment industry the way Bria did is something that most people can only dream of. Unfortunately, however, it isn’t always an easy thing to deal with. Although she was initially riding high on the movie’s success, things changed once everything started to slow down. Bria told Independent, “I got home after four months on the press tour and I was so depressed. I was like, ‘Oh, I don’t have a hundred people taking my picture anymore? No one’s telling me I’m beautiful? This is so f**ked up!’ I didn’t know what to do with myself”. Fortunately, she was able to refocus and get herself to a more positive place.

What Is Bria Doing Now?

Although it’s been about two years since her last on-screen appearance, Bria seems to be doing well. She is still very active on Instagram and her posts show that she is living her best life. She has been traveling, spending time out in nature, and still tapping into her creative side. In March of 2021, she revealed that she had just finished directing her first feature film. The release date for the movie, Lola James, has yet. to be revealed. The project stars Nicola Peltz in the title role and tells the story of a teenage girl who is working hard to save money to give herself and her younger brother better lives.

What’s Next for Bria?

At the moment, it doesn’t appear that Bria has any projects in the works. However, she has plans to continue her journey as an actress. During her interview with Independent she said, “People only see me as Halley, and I almost feel like now I’m at a point where I have to prove to everyone that that’s not all I can do. People assume that I’m this trashy motel girl, and that those are the only roles I can play, but I really take it seriously, and I know that I can do more. I want to do comedy, I want to do horror, I want to do all these other things. But that’s why I think it’s super important for me to create things rather than just act. I’m like the pilot on this plane and I’m figuring out where I want to land”. Hopefully, we will be seeing much more of Bria in the future.